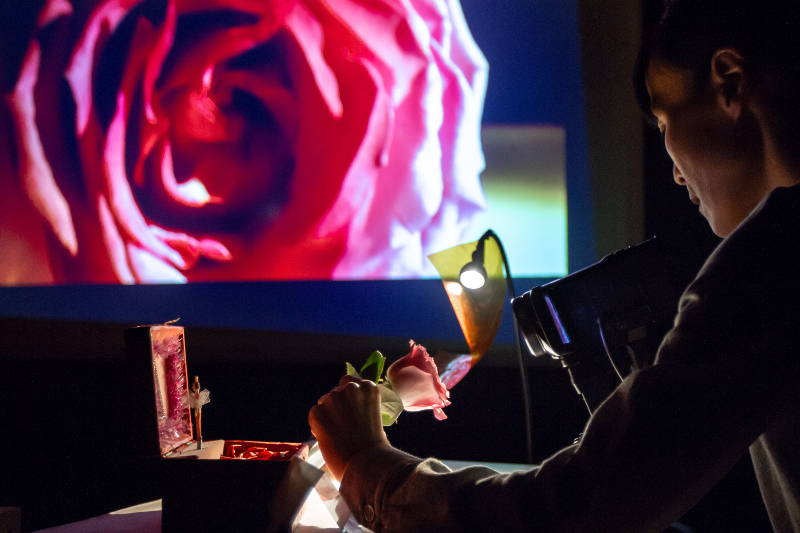 BOTTOM LINE: Coined by the artist as "Microscopic Live Cinema-Theatre," Sachiyo Takahashi's Sheep #1 is a perfect blend of the whimsical and the profound in its abstract narrative form.

The sheep is hungry.

So he goes on a journey in search of...

He follows a pencil thin path. He gets stranded amidst a glacier, until his solitude, his childhood, and other trivial things (printed on pieces of paper frozen inside of ice cubes) melt away. He falls in love with girls; gets trampled by a parade of wind-up penguins; and encounters a Zen master that's a stuffed bunny rabbit.

They talk, the Zen master who's a bunny rabbit and the sheep who wants to eat the universe, about everything and nothing. And between the microscopic prisms, I forgot what I was looking for, just like the sheep did. Yet it seems that I found something that I did not expect—never did I think that a tiny sheep figurine would be plucking at my heartstrings like this, or how a conversation carried out entirely in silence, with tiny words on strips of paper, which Takahashi places around the Zen master and the sheep with tweezers, could be so enthralling. Throughout the show, Takahashi's manipulations of each piece of each prop are deliberate, poetic, and, perhaps even more importantly, kind.

Sheep #1 is the Muji of live theater, a perfect blend of the whimsy and the profound. Inspired by Le Petit Prince (The Little Prince) by Antoine de Saint-Exupéry, this is a fable for the children alive in adults' hearts. For when the aviator finally tosses out the picture of a box with three holes in it, the little prince replies:

"That is exactly the way I wanted it! Do you think that this sheep will have to have a great deal of grass?"
"Why?"
"Because where I live everything is very small . . ."
"There will surely be enough grass for him," I said. "It is a very small sheep that I have given you."
He bent his head over the drawing.
"Not so small that—Look! He has gone to sleep . . ."

A whole universe can be created from what cannot be seen, and from that same space, Takahashi shows us something that's so beautifully minimalistic and complex, it becomes enigmatic. It's indeed something that perhaps only a child would understand instantly. So be kind to that empty space between seeking and knowing. Your imagination will do the rest.