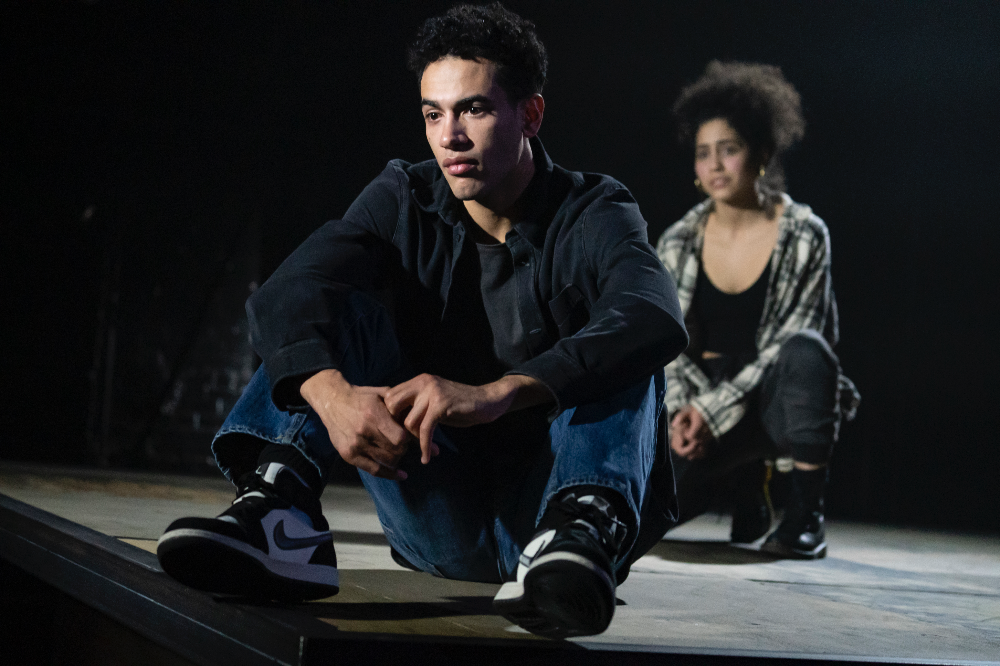 BOTTOM LINE: A laudable take on immigration that aims for universality and succeeds…perhaps too much.

One reason immigration policy is so complicated is because there are so many different stories. It isn't just "legal" vs. "illegal"—there are so many different paths to becoming documented, and so many different hurdles for those who are don't yet have "legal status," that attempts to generalize or universalize can often fall flat. Yet universalization—at least of a sense—seems to be exactly what Martyna Majok is aiming for with her bare bones Sanctuary City. That the play works as well as it does is a testament not just to Majok's writing, but also to Rebecca Frecknall's direction (restaged post-shutdown by Caitlin Sullivan) and to the excellent three-person cast. Nevertheless, the lack of specifics about these characters might leave some wanting more.

"B" and "G" (Jasai Chase-Owens and Sharlene Cruz, respectively) are two teenagers adrift in post 9-11 New Jersey. B's mom is "goin back" (to where is left unsaid), while G's mom is stealthily working on her naturalization so she can get out of what is apparently an abusive relationship. This explains why G continues to crash at B's place; almost immediately, the "sanctuary" of the play's title takes on several meanings.

Throughout the first half of the play, B and G experience their last years of high school on a completely bare stage, without the benefit of costume changes or props. Frecknall's direction is especially helpful here: eschewing any miming (like the closing of a window or door), Frecknall's smart use of movement always ensures we know exactly where we are. Crucial to this are Isabella Byrd's lighting and Mikaal Sulaiman's sound: both specific and subtle, the few design elements are essential to the story-telling. When B and G brave a school dance, they are still the only two people onstage, but the pink lighting and the distorted sounds of the Backstreet Boys will immediately take you back to that old "auditeria" and all those awkward teenagers waiting for something to happen.

Many of the scenes in the first half are quick and semi-repetitive, as if we were watching a class on Meisner technique. Initially this may be confusing; at the very least, it lends itself to multiple interpretations: do these variations on a theme all happen, or are we watching a memory get refracted and changed over time? Are these the same two characters, or are the variations meant to show us commonalities across different stories? Are ‘B’ and ‘G’ meant to stand in for more generic immigrant “Boys” and “Girls”? But gradually, certain things become clear. B's mom has left the US, while G's mom eventually gets her citizenship, allowing G to get naturalized along with her. This means that while G is able to attend college, B cannot: with no access to student loans, he is stuck working at a restaurant while G goes on to have the kind of life B can only dream of. Indeed, one of the most memorable monologues comes when B reflects back on a day when he traveled to G's school to see her, but instead snuck into a class and then a dining hall, resulting in one magical college day.

As G heads off to college, the two best friends come up with a plan—marriage. And what seems playful and possible in the play's arguably nostalgic first half becomes all too real in the second, where the reality of B and G’s increasingly adult life is underscored by the introduction of props and costumes, as well as a shift to dramatic realism. (The script suggests the possibility of more detail in the set as well, but we don't really get that in this production).

To say more about what happens in the second half, or even to explain the play's third character Henry (Austin Smith), risks spoiling what for some (based on audience reactions) is clearly a surprise. It’s enough to say that Henry’s presence throws B and G’s plans into disarray, while at the same time illuminating, in stark relief, just what is at stake for all three characters.

And it’s really in this second part where I started yearning for more specifics. In a script note, Majok explains that she intentionally leaves the countries of origins vague so as to “encourage wider, more inclusive casting across subsequent productions.” It’s a laudable, even necessary, goal, but as the play gets more “real,” and we see the bind B is in, I started thinking “but wait! What country is he from? (Because maybe he could try for asylum).” We also don’t get much of a sense of B’s ties to his family or his homeland (or G’s, or Henry’s, for that matter), aspects that would help raise the stakes for B’s choice to remain in the U.S. In many ways, Sanctuary City tries to show the converse of that old saw about how universality is often best achieved through specificity.

The play ends in 2006, about six to seven years before a few key developments in immigration law that would radically change the options these characters have. With the benefit of hindsight, we may want to tell them “just hold on! Change is coming!” But of course this isn’t how one can live a life, and perhaps that is what Sanctuary City leaves us with—we can only work, and love, and struggle, in the present, because the past is malleable and untrustworthy, and the future is, simply, unknown.

(Sanctuary City plays at the Lucille Lortel Theatre, 121 Christopher Street, through October 17, 2021. The running time is approximately 1 hour 45 minutes, with no intermission. Performances are Tuesdays through Thursdays at 7, Fridays at 8, Saturdays at 2 and 8, and Sundays at 2 and 7. Proof of COVID vaccination is required, as are masks. Tickets are $30 - $75, and are available at nytw.org.)

The cast is Jasai Chase-Owens, Sharlene Cruz, and Austin Smith.