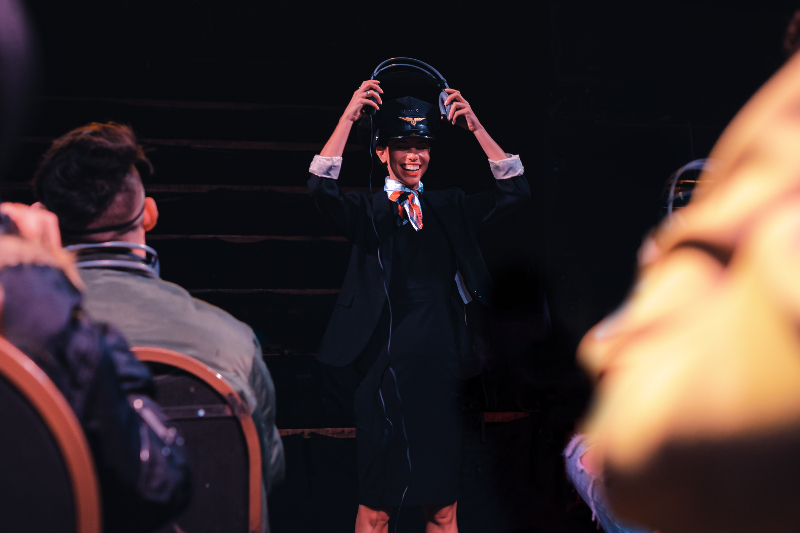 Agustina Cedraschi in Odd Man Out. Photo by Camilo Llorente.

Odd Man Out is, on its surface, a relatively simple conceit. You sit in a room, blindfolded, wearing binaural headphones. While you listen to an audio play, other senses are stimulated—not sight, but smell and touch. But this simplicity masks (pun intended) a deeper mission—to give audiences the sense of what happens when you cannot see.

The play was initially produced by Teatro Ciego, an Argentine theatre company with a long history of creating live theatre in the dark. This isn’t just a gimmick—the company uses a significant number of blind and low-vision individuals in all roles, from performing to creative to technical. So in a sense, making theatre in the dark creates an environment where everyone can participate equally.

Odd Man Out began in Argentina in 2019, but the U.S. venture (their first, in a partnership with theatreC) seems to have started right as the pandemic did. But ultimately, Odd Man Out proved to be somewhat suited to the new norm of social-distancing—with most of the performances being done via audio recording, the company was able to bring together their new English-speaking cast virtually. (A short film at the end explains this process more fully, and includes brief interviews with some of the voice actors).

The story of Odd Man Out concerns one Alberto Rinaldi (Gonzalo Trigueros in the English version, Juan Palomino in the Spanish one), an Argentine musician returning to Buenos Aires after spending decades in the United States (for reasons that become apparent by the end of the play). Most of the play takes place on the flight, as Alberto (who is blind) reflects back on memories of his past life, both in Argentina and New York. As he lands at Ezeiza, we get to more fully understand just what is at stake with this long-deferred trip.

If you have listened to any fictional podcasts, the audio component will have a familiar quality. While the sound design by Nicolas Álvarez, which makes full use of binaural effects, is quite well done, you never fully lose that not-really-live sense of “audio play,” something that perhaps is every more noticeable in a room with both a live audience and actor. (Agustina Cedraschi is the Flight Attendant, who in a charming framing device, welcomes you into the space as if you’re boarding a plane, and then gives everyone instructions once "boarding is complete.")

But if you’re like me, you’ve never listened to a podcast blindfolded (most of the time, I’m doing three other things at the same time). In forcing you not only to sit still, but to give up your sense of sight, Odd Man Out thrusts you into Alberto’s head in illuminating ways. This alone would be somewhat novel (to experience a play about a blind man “as if” you yourself are blind), but Odd Man Out goes further, bringing in touch (in several, surprising ways which I won't spoil here) along with smell. (Taste comes via the pre-show drinks available in the lobby). Both elements are timed perfectly with the recording, but the scent design is by far the more striking. It’s sort of like those old scratch-and-sniff stickers, but on steroids. The smells are rich, complex, and incredibly evocative (and yes, you can even smell them through your face mask).

While the sensorial experience is stimulating, the play itself is more mixed. As Alberto’s attention moves between his fellow travelers and his past memories, the lines between both can blur a bit. If at times I lost track of “where we were,” I actually enjoyed how this blurring mimics what it’s like to move between reality and memory in your own life. But while Alberto’s earlier memories help develop character, the later ones start to seem like drive-by attempts to engage with “issues.” In one scene, Alberto and his friend experience blatant (almost violent) racial discrimination. While the moment opens up interesting questions about what “race” means for the blind, Odd Man Out only just skims the surface, and then moves on.

And then comes the shift to Argentina’s “Dirty War”—the period from 1976-83, in which tens of thousands of people, many of them students, writers, artists, and other “activists,” were “disappeared” by the dictatorship. It’s well-trodden ground for Argentine theatre and film, but if you’re at all familiar with this subject, the treatment here may feel a bit didactic and heavy-handed. (One character clumsily says “I’ve read something about Argentine history…You were taken away and no one could ever find you. There were even pregnant women who gave birth in captivity and their children were given up for adoption or were taken by the same kidnappers.”) To be fair, my Argentine husband said there was no such explanation in the Spanish-version, so some of this may be a function of translating for a U.S.-audience. Still, while los desaparecidos (those who were disappeared) get more airtime than “race,” and while the Dirty War certainly plays a significant role in Alberto’s own journey, coming as suddenly as it does towards the end of the hour-plus run time, it all feels just a bit too little, too late.

That said, Odd Man Out offers a compelling new take on “immersive theatre,” and an important reminder that by subtracting one sense, you can often experience “more” with the others. And Teatro Ciego, theatreC, and PITCHBLACK are definitely companies to watch. While the reliance here on audio recording is understandable given the pandemic, I eagerly await their future endeavors, especially if they are able to shift more fully to live performance.

(Odd Man Out plays at The Flea Theater, 20 Thomas Street, through December 4, 2021. The running time is 75 minutes with no intermission. Proof of vaccination and masks required. Performances are Tuesdays through Fridays at 7; Saturdays and Sundays at 3 and 7. No performances November 23-25. Tickets are $50, $35 for students and seniors, $90 for VIP access. For tickets and more information visit oddmanoutnyc.com and teatrociego.org.)