The Last of the Love Letters 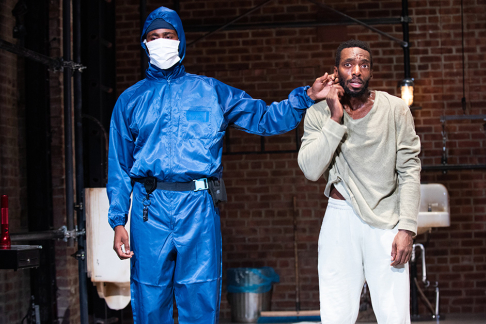 Xavier Scott Evans and Daniel J. Watts in The Last of the Love Letters. Photo by Ahron R. Foster.

“Do you remember seeing those things in those buildings? What are they called?" asks the character of You No. 2 (Daniel J. Watts). He fumbles underneath his mattress, one of the few objects in the hospital room, and fishes out a couple of playbills. “Plays! And theaters!” he exclaims gleefully. The small, sparsely seated audience of the Atlantic’s Linda Gross Theatre chuckles softly behind their masks. Although Ngozi Anyanwu’s The Last of the Love Letters takes place in an anti-utopian no-time, the prospect of nearly forgetting what it feels like to be “sitting in the dark, breathing with strangers” is what connects on- and off-stage worlds. That, and of course the torments of a relationship after a breakup with a romantic partner.

In a nutshell, The Last of the Love Letters consists of two soliloquies by two former lovers. In those monologues—enactments of the texts of their letters—You (playwright Ngozi Anyanwu) and You No. 2 (Watts) try to make sense of the people they have become, and of their world without the other one in it.

As we enter the theatre, You is already on stage, lounging in a tiny apartment crowded with furniture, vinyl records, and chaotically decorated with drawings. The entire set (by Yu-Hsuan Chen) is jammed towards the middle, conveying the suffocating state in which You found herself towards the end of the relationship. Playful, humorous, sincere—the heroine pours out her soul, changing costumes in the middle of the scene to mark her transition from somebody her partner wanted her to be to what she thinks she is.

The transition to the next scene is jerking—suddenly we are catapulted from the realistic play into a futuristic dystopian asylum, where You No. 2 is confined for, presumably, being an artist. Stagehands dressed in white medical protective suits, complete with face coverings, pack an entire apartment in a large plastic container and roll it away. Only the bed remains, which the lovers still symbolically share despite being apart. The feeling of uneasiness is reinforced by flickering colored lights (by Stacey Derosier) and alarming sound design (by Twi McCallum).

We get an intriguing glimpse of the play’s universe during this transition, and with the appearance of a character simply named Person (Xavier Scott Evans)—a nurse of few words who periodically gives You No. 2 his medications. Unfortunately, we don’t get much outside of those short bits, and we are left to our imagination to fill in the blanks of this Orwellian world. It might be argued that interpersonal relationships (the couple) are Anyanwu’s focus, but I wish she embedded this more thoroughly in the larger context. After all, the last of the love letters performed by You No. 2, one addressed to his former lover, turns out to be possibly the last love letter that civilization possesses. I am trying to avoid spoilers, but the stakes are higher than just private correspondence, and I wish the play elaborated more on this.

Daniel J. Watts, however, makes it all worth it. With the extremely minimal scenic design now on stage, Watts uses every inch of the space in his physical and extremely charged performance. Every movement, precise and light, seems like a dance. Even his laying down on the floor is one of the most graceful performances of a motionless body, limbs twisted painfully, like those of a broken doll. Watts' performance has that gut-wrenching, bone-chilling, scalp-tingling intensity that is not translatable to the screen (or Zoom). Watching Watts I was reminded of what I longed for during this era of virtual theatre—the magic of stage presence.

(The Last of the Love Letters played at Atlantic Theater Company, 336 West 20th Street, through September 26, 2021. The running time was 75 minutes with no intermission. More information at atlantictheater.org.)