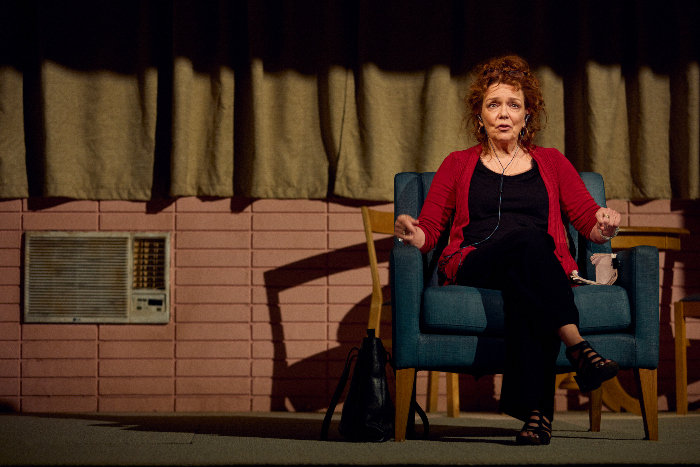 BOTTOM LINE: The inspired pairing of Is This A Room and Dana H. is the definition of “can’t-miss” theatre. See both while you can.

Like Is This A Room, Dana H. benefits from going in cold. But even knowing it’s about (as the website says) “a woman who was held hostage for five months in a series of Florida motels” can’t begin to capture just what is in store. Yes, this is a tale of “true crime,” but more than anything else I’ve encountered recently, the cumulative effect of Dana H. thrusts it far beyond such conventions of genre. This is truly a must-see for anyone who appreciates theatre full of subtly and nuance.

Playwright Lucas Hnath (known to Broadway audiences for A Doll’s House, Part 2 and Hillary and Clinton) offers up the story of his mother Dana Higginbotham. But while he had her sit down for an interview with Steve Cosson (artistic director of The Civilians, a company that creates theatre out of interviews), Hnath doesn’t go the full Civilians route—instead of having an actor say her lines, he has the inimitable Deirdre O’Connell lip sync to the original recordings. (And I suspect that there is far more writing and dramaturgical craft at work here than it might seem).

O’Connell wears headphones throughout, reminding us that she is always at a remove from Higginbotham. Yet somehow, this juxtaposition—seeing a stage actor, hearing a real person—heightens the “reality” of the story in a way you wouldn’t get with either a straight-forward filmed interview, or a traditional dramatic re-telling. (In this way, it feels reminiscent of the work of Anna Deavere Smith). Much of this is due to O’Connell’s lip syncing—she would leave even the best queen on RuPaul’s Drag Race well in the dust. Facing over an hour of material, she manages to capture each and every pause, stutter, and vocal shift in Higginbotham’s speech. It’s simply remarkable.

There comes a section where Hnath begins to overlap the recordings in such a way that lip-syncing becomes impossible, and Waters shifts gears to give us a glimpse (and really—just a glimpse) into a more typical “staged version” of this story. It’s a chilling turn, with the visual mundanity providing us an unsettling window into the indifference that real-life Dana encountered from others throughout her harrowing ordeal. When O’Connell returns to her chair (courtesy of Steve Cuiffo’s so-subtle-you-won’t-realize-they-happened illusions) and continues her tale of terror, it’s strangely a relief.

The inspired conceit (of lead producers Dori Berinstein, Sally Horchow, and Matt Ross) to pair Dana H. alongside Is This A Room no doubt helped both shows come to Broadway (it’s hard to imagine either one would have been staged on its own). These two shows share more than just a stage—each uses verbatim source material (Is This A Room uses the transcript of a recording provided by the FBI), and each revolves around a truly unforgettable lead performance (both of which are obvious contenders come awards time). But while these two plays were originally slated to play into 2022, they will now be closing in mid-November. Please, see them both. You will be glad you did.

(Dana H. plays at the Lyceum Theater, 149 West 45th Street, through November 28, 2021. The running time is 65 minutes. The play runs in rep with Is This A Room; specific performance times vary. Performances (of one show or the other) are Tuesdays at 7, Wednesdays at 2 and 8, Thursdays and Fridays at 8, Saturdays at 2 and 8, and Sundays at 3. Tickets are $39 - $149; $35 rush tickets are available. For tickets visit telecharge.com. For more information visit thelyceumplays.com.)

The cast is Deirdre O'Connell. Understudy is Jordan Baker.