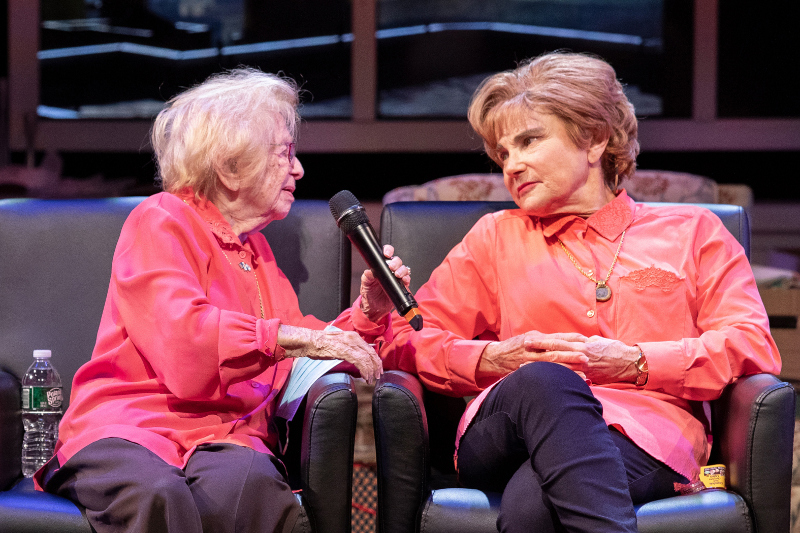 Tovah Feldshuh doesn't so much bring the former Karola Ruth Siegel to life—because the 93-year-old Dr. Ruth Westheimer has plenty of energy and spark of her own going on—as she infuses warmth, pathos, mischievousness and humor into the tragedies and ultimate triumph that is the nonagenarian's ongoing existence.

The tide turned early in young German and Jewish-born Karola's life when her mother and grandmother made the gutting decision to sacrifice themselves but save her by sending her on a Kindertransport to Sweden when she was 10 (her father had already been grabbed off the street). An only child and orphaned by the end of the war, she moved to Mandatory Palestine at 17 and became a skilled sniper in the Haganah, despite being just 4' 7". Eventually, after time in Paris and two brief early marriages, she settled permanently in Washington Heights (where she still lives) as a single mother. The next chapter of her life found her earning a doctorate in her 40s and starting her long marriage with Fred, a fellow Holocaust Survivor who she met on a ski slope ("Skiers make good lovers. It's all about movement and taking risks."). Dr. Ruth went on to raise a family and become an international educator and celebrity with her books, radio and television shows, and media appearances.

Becoming Dr. Ruth opens in 1997, right after Fred has unexpectedly passed away. Ruth is packing up the apartment, intending to move downtown after 40 years in Washington Heights. Feldshuh, in a bright pink top and a shock of red hair, pops like her outfit, chuckling with delight as she realizes she has "company," not letting concerned calls from her children (they don't understand why she wants to move), the movers, or her communications point man interrupt her in sharing moments from her life.

Like many Survivors, Dr. Ruth has only publicly revealed some of what she has endured—the pain of losing her parents and grandmother, and all the rejection and loneliness that came with it, is still vast and powerful. Feldshuh is completely engaging and seamlessly moves between the comedic and the horrifying, whether she's telling of the last time she saw her mother and grandmother at the train station, looking for a family heirloom, reminiscing about being introduced to Bill Clinton, or cheerfully holding up Dr. Ruth's Board Game Of Good Sex. The affection and love Feldshuh has for both Dr. Ruth and this role come through abundantly.

Although it is wonderful to finally see Feldshuh on a stage—and she's terrific—it is even more fantastic to see and hear from the real Dr. Ruth in the talk back following the performance. It is fun to watch the two women, each legendary in their own right, interact as they answer questions about transferring the show and ticket sales. The night I went, Feldshuh quipped "When she shows up, sales spike. I'm adorable but I'm not Ruth Westheimer," before then getting irritated with a cell phone—"You're lucky that didn't happen during the show...Sharpshooter."

Dr. Ruth and Feldshuh also discussed serious subjects like what it means to play someone who carries trauma. Feldshuh said "the great thing about this play is that Ruthie doesn't bury herself with tsuris." Dr. Ruth is a very vocal cheerleader, not only for Feldshuh but also for writer Mark St. Germain and set designer Andrew Diaz and the hundreds of props he included. "In the orphanage, there were no possessions. Objects have meaning. The possessions make life possible."  Ruth said she considers Becoming Dr. Ruth to be a "testimony to my whole family," while also remarking that our audience had laughed more than any other. "I'm jumping for joy. I'll be here tomorrow!"

Feldshuh and Dr. Ruth are clearly stumping for the production to get a longer uptown run, and chances are they'll succeed. How could you say no to Dr. Ruth when her version of tikkun olam is to "Heal the world with sex therapy"?! But in the meantime, if you can go this week, and perhaps even attend a post-show conversation, do it. The chance to experience Becoming Dr. Ruth in the intimate museum theatre is not-to-be-missed. And you may even happen upon Dr. Ruth, who has vowed to attend every performance.