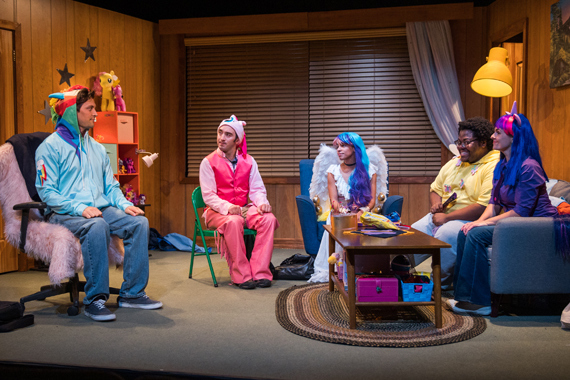 BOTTOM LINE: Although it sometimes eschews character development in favor of politics, The Antelope Party is thoroughly compelling with strong performances and innovative set design.

The Antelope Party opens with a small group of devoted My Little Pony fans (Bronies or Pegasisters, depending on gender) who gather while brightly costumed as their favorite characters from the animated series. The group members use the fantasy world created through this role-playing game to escape the dullness of their small Rust Belt Pennsylvania town, one where the majority of citizens lean politically to the right. They also rely heavily on each other—each character speaks of the support they find in this meetup group.

But the welcoming environment of this colorful living room full of posters and pony toys soon becomes corrupted by a sense that something dark and sinister lurks just outside. The members talk about having to hide their costumes during their walk to the apartment of group leader Ben (Edward Mawere) out of fear that they will be questioned by the neighborhood watch, whose presence seems to evoke both annoyance and alarm. Cute and sweet Maggie (Lindsley Howard)—for whom three of the other characters have a romantic interest—may have been kidnapped by this group, something she downplays when questioned.

Eventually it is revealed that Maggie’s father is a high-ranking member of the neighborhood watch, who soon enough declare themselves the Antelope Party. Whereas Maggie might once have had trepidation towards her father and his pals, she now implores the other members to join, urging them to sign a pledge of alliance so that the Antelope Party can keep them safe. Doug (Quinn Franzen) is the first to question Maggie’s sudden change of heart and to see the larger dangers of the Antelope Party, especially when they stop and question him simply for walking alone at night. But Doug eventually gives in—he joins up promising the increasingly distraught Rachel (Caitlin Morris) that the only way he can stop them is from the inside. And once inside, it becomes hard to tell just where Doug’s allegiance lies.

The talented cast, under the direction of Jess Chayes, skillfully tackles the dramatic twists and turns, managing to make the characters' love of and bond through the Brony/Pegasisters culture seem relatable and plausible instead of a cartoonish parody. As Shawn, Will Dagger impressively tackles the sharp shift from fawning dweeb to abusive fascist. And Edward Maware is especially effervescent as Ben, a man who seems determined to paint over the darkness in his world with the escapism of a fantasy realm, until his race makes him a target for violence and his perpetually gleeful disposition is shattered by reality. (On a side note, the last play I saw before the pandemic shutdown was The New Group's one in two, which also starred Maware, and It was nice to see his familiar, enigmatic presence greeting me back to the theater world.)

Aside from the performances, Yu-Hsuan Chen’s innovative and versatile set is markedly different from any set design I have seen, with corners of the living room quickly changing into restaurant counters and windows that open into outdoor scenes. As the darkness settles over this town, the set design also changes. Bright My Little Pony posters get replaced by eerie antelope skeletons and a beige American flag design takes over the corners, perhaps pointing to the misguided patriotism guiding the abusive right-wingers.

Although The Antelope Party had its world debut in 2018 and was intended to have its New York premiere in March 2020, the prescient material seems incredibly timely, perhaps even more now than when it initially debuted. It is quite easy to draw parallels between this Rust Belt allegory and recent events like the Capitol riot of January 6, the rise of QAnon, and the large number of anti-Vaxxers who seem to embrace more and more outlandish conspiracy theories. However, to nail home his political agenda, playwright Meyer skips over some of the characters’ backstories, and forces these people to transform so rapidly that they quickly become unrecognizable.

While some of the ambiguity in the plot serves to hammer home the dangers of group think and authoritarianism, it also causes some lack of clarity as to how the characters so quickly shrug off their ideals to join ranks with the nefarious Antelope Party. Maggie, in particular, seems to shift from a sweet girl to a deranged monster in the blink of an eye. Nevertheless, Meyer’s script, especially as performed by this talented cast, creates a compellingly suspenseful production that shows how fear and the desire for power can quickly pervert and corrupt group dynamics. While the My Little Pony world might show the magic of friendship, the tribalism at the heart of The Antelope Party shows the dark rabbit hole that it can pull us into.

(The Antelope Party plays at The Wild Project, 195 East 3rd Street, through November 21, 2021. The running time is 2 hours 15 minutes with an intermission. Proof of vaccination and masks required. Performances are Tuesdays through Saturdays at 8 and Sundays at 3. Tickets are $35 ($20 for artists) and are available at thewildproject.com. For more information visit theantelope.party.)