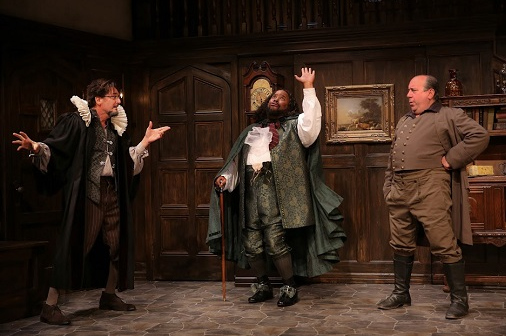 For 18 years, Red Bull Theater has been bringing us stylish, up-to-date productions of plays of the Elizabethan era and beyond. Ben Jonson, a contemporary of Shakespeare whom I have always enjoyed for his darker view of human nature, has contributed many works to Red Bull’s repertoire, and his 1610 play The Alchemist, set during a plague year in London, seems a clearly resonant choice for our time. I just wasn’t expecting it to be this funny! Fans of Red Bull’s recent staging of The Government Inspector by Nikolai Gogol, adapted by Jeffrey Hatcher and directed by Jesse Berger, can look forward to the enviable craft of the same creative team.

Where there are many doors onstage (placed by ingenious set designer Alexis Distler) there are many secrets and the potential for great farce. Master Lovewit is away from London, having left the care of his elegant townhouse to his butler, "Captain" Face (Manoel Felciano), a man of many swindles. Face has recruited two endearing vagrants named Subtle (Reg Rogers) and Dol Common (Jennifer Sánchez) who excel at taking money from overblown hypocrites who want not only what they don’t need but what doesn’t even exist.

And what could be targets for satire at the tail end of the Renaissance? Alchemy, the classical quest to turn base metals into gold, along with the quests for true love, true religion, good luck, respect, and other things that are subjective enough to be easily monetized. Face, Dol, and Subtle know that Lovewit is headed home later that afternoon, which gives them time to rob the lustful metrosexual Sir Epicure Mammon (Jacob Ming-Trent), the superstitious gambler Dapper (Carlson Elrod), the passive-aggressive new-age religionist Ananais (Stephen Derosa), and the tobacconist Abel Drugger (Nathan Christopher).

Every time one of their marks visits, Face and Subtle quickly dress in new costumes, assume new modes of speech, and show their guests through side doors just ahead of their next visitor. This scheme might go perfectly except Dapper has lost his watch at cards and can’t remember when he is supposed to come back. Similarly, Mammon has a hired man named Surly (Louis Mustillo) who sees through most of the mumbo jumbo; in this production, this skeptical virtue comes with an Italian accent and a nod to the character’s origins in “the Dutch colony of Brooklyn.”

The tension rises every time someone gets what they pay for and comes back to ask the famous Alchemist, Subtle, for more charms. Drugger wishes for advice on how to woo the beautiful young widow, Dame Pliant (Teresa Avia Lim), who has a hot-blooded brother, Kastril (Allen Tedder), who wants to pay for lessons in the art of arguing. Face and Subtle both scheme to take this widow for themselves, which makes their partner Dol feel betrayed, which leads to the three turning on each other.

Indeed, in this adaptation the women rise to the top of the pecking order with their resourcefulness. That is not to say that Face and Subtle don’t work together with remarkable chemistry (no pun intended). As an example, whenever we see Ananais (Stephen DeRosa), he is looking for his superior, the ridiculously named Tribulation Wholesome. As opposed to casting another actor as Wholesome, in this version Face grabs Ananais’s hat and cape off the coatrack and impersonates the religious leader in a tone so silly it is convincing. Naturally, in this play, those who lose their money see whatever they want to see. Movement coordinator Rick Sordelet pulls all this off alongside Jesse Berger's stellar direction, while Deborah Hecht's vocal and dialect coaching adds so many types of voices it feels like a very large cast indeed.

The Alchemist works and can be adapted to modern times because of the predictability of hate and desire. In Jonson’s time, it was common for the English to laugh at Spain (the ones with the sinkable Armada) and, really, any other country. In this version, when a certain character is told he is related to the Queen of the Fairies and kisses someone unexpected, he decides his sexuality must simply be more fluid than he previously understood. Each age brings with it implicit biases and an endless supply of jokes. And since the characters often desire gold, a certain James Bond theme song fits in nicely.

Hats off to costume designer Tilly Grimes for enabling so many rapid changes of personalities. These outfits show us several versions of what people expect an Alchemist to look like, emphasize the enormous gap between social classes, and show what a resourceful commoner like Dol (“her father was a village in Ireland”) can do when she puts on the airs of the wealthy. The wig and makeup magic of Tommy Kurzman helps make so many characters larger than life, especially Sir Epicure Mammon. Lauren Page Russell provides all the props needed for the nouveau-riche life, from a hoard of gold coins to a singing bowl to a suit of armor. Cha See’s lighting helps remind us of the darkness of greed and the sparkle of gold.

(The Alchemist plays at New World Stages, 340 West 50th Street, through December 19, 2021. Running time is two hours with an intermission. Performances are Mondays, Wednesdays, and Thursdays at 7; Fridays at 8; Saturdays at 2 and 8; and Sundays at 2. Tickets are $70 - $90 and are available at telecharge.com or by calling 212-239-6200. For more information visit redbulltheater.com.)