Wrestling with Zionism: A Reader's Theater

Written by members of Jewish Voice for Peace; Directed and Adapted by Esther Farmer
Part of Judson Arts Wednesdays 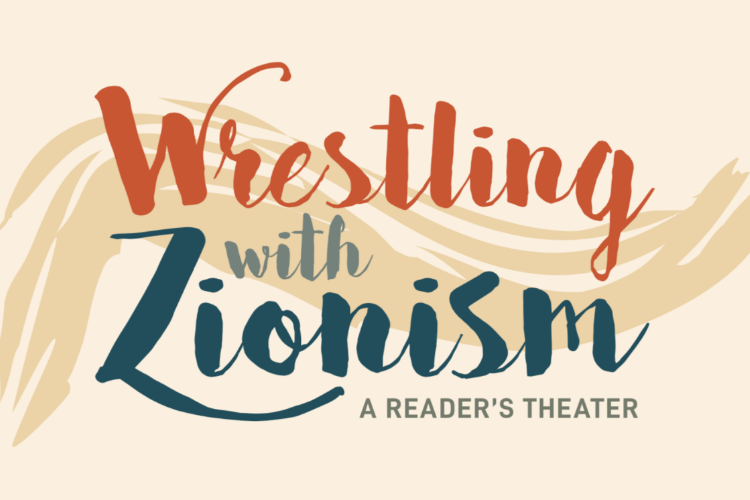 BOTTOM LINE: A poignant and painful, but ultimately uplifting, look at the personal impact of racism and oppression on Palestinians living in Israel and throughout the world.

Growing up, most US-born Jews are told that the 1948 founding of Israel represents something of a contemporary miracle. After all, community members are informed, prior to its development, the area was empty, "a land without people, for a people without land." The fact that this premise is false--that thousands of families had worked, farmed, and thrived in Palestine for centuries--typically goes unmentioned. Worse, those who have challenged this Zionist premise have, for 72 years, been met with derision, tarred as anti-Semites, or simply ignored.

Wrestling with Zionism is an attempt to change this ."Stories bring people together," director Esther Farmer said in her opening remarks. And they do.

The hour-long staged reading, compiled by Jewish Voice for Peace and written by Christian, Muslim, and Jewish activists, brings nine women and men together to share poems, stories, and memories. The representations are diverse. There are US-born Palestinians; a young Palestinian Muslim born in a Syrian refugee camp; a middle-aged Israeli Jew who finally opened her eyes to Israel 's ongoing oppression of the Palestinians; an Israeli man who refused to serve in the military; an American Jew who visited the Holy Land at age 16 and was appalled by the overt racism she witnessed; and a Christian Palestinian whose grandparents home was shot into--wounding his uncle and a neighbor--by Israeli Defense Forces who later admitted that they'd targeted the wrong house. A Palestinian Jew, whose father had opposed the creation of a Jewish state in Palestine, repeats a question her dad had asked: Why should the Palestinians, who had nothing to do with the Nazi Holocaust, be forced to pay for Hitler's genocide?

In addition, the indignities of checkpoints and random searches are vividly described. What's more, the subtle and overt ways that both American Jews and Israelis are indoctrinated to believe that Palestinian lives are worth less than Israeli-Jewish lives is gut-wrenching in its honesty. All told, the stories are raw, intense, and beautifully told.

The focus is personal, and, of course, the personal is political. But Wrestling with Zionism does not wrestle with the bigger questions: Whether it makes sense to advocate a two-state solution, or how best to force Israel to treat the Palestinian people with respect, fairness, and equity. Of course, these are tactical and strategic concern,s and can be parsed at another time, in another place. On the night of this performance, it was enough to listen to one another, to hear one another, and to feel compassion for one another.

Wrestling with Zionism was written by Jewish Voice for Peace (JVP) and adapted and directed by Esther Farmer. Produced by Sarah Sills. Props by David Bragin and Sara Petitt. Slide Show Photography by JVP members.