By Jewelle Gomez; Directed by Mark Finley
Produced by TOSOS (The Other Side of Silence) 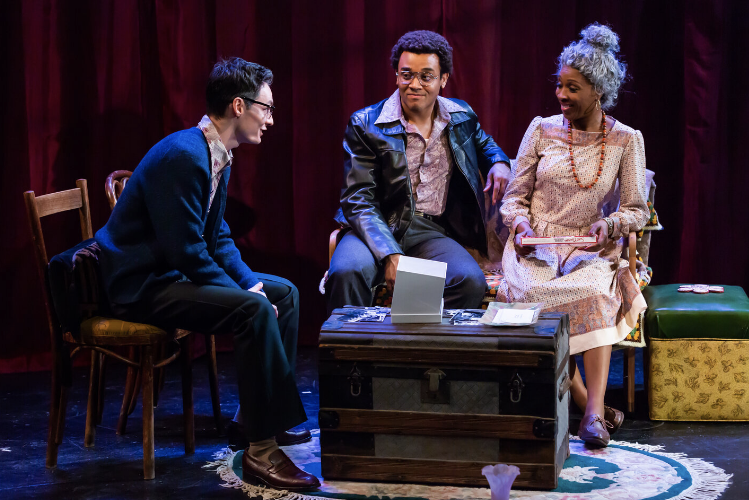 When blues singer Alberta Hunter (1895-1984) took the stage at a now-defunct New York City club called the Cookery in 1977, she was 82 years old. It was a legendary comeback. Although Hunter had been popular in the decades before World War II, singing to packed houses in both the United States and Europe, by the late 1940s audiences were looking for a more upbeat sound, and Hunter was left behind. But she wasn't defeated. Jewelle Gomez's play Leaving the Blues, starring the fabulous Rosalind Brown, tells her remarkable story.

An African-American lesbian who'd been supporting herself since she was a teenager, Hunter was a mistress of reinvention. Rather than languishing in melancholy as her career sputtered, she somehow fabricated a high school diploma—she'd dropped out before finishing—and enrolled in nursing school. Then, after becoming an RN, she spent 20 years tending to patients until forced retirement sent her packing. Hunter clearly did not want to sit idly or fritter away her "golden years," and it took little prodding from friends and former musical colleagues to get her back on stage, where she belted the blues to appreciative audiences until 1984.

Directed by Mark Finley, Leaving the Blues is structured as a back-and-forth reminiscence egged on by the long-deceased Will (Michael Michele Lynch). The uncle of Hunter's feisty longtime partner, Lettie Taylor (well played by Joy Sudduth), Will returns to Hunter as a ghost, ostensibly to entice her to parse her relationship with Lettie. It's a contrivance, for sure, but it provides a ready vehicle for Hunter's look back. Will also serves as a comic foil and introduces several of Hunter's former musical pals. Among them are the tap dancing Calabash Twins (the excellent Cooper Sutton and Benjamin Mapp), a queer couple who lived more or less openly and offer a clear counter narrative to that of Hunter and Taylor, who hid their relationship.

Leaving the Blues explores the many challenges Hunter faced, among them racism, sexism, aging, and the onerous realities of working class life. Nonetheless, it is Hunter's lesbianism—and her decision to remain closeted—that is most emotionally resonant and ultimately tragic. Hunter's fear of being outed poisons her life with Lettie and eventually leads to heartbreak. Throughout the drama, as Hunter reflects on her storied life, she imagines what might have been, but wasn't. It's bittersweet and extremely touching.

This is heavy stuff, but musical interludes, in which Brown brilliantly performs songs by Eubie Blake, Andy Razaf, the Reverend Thomas A. Dorsey and others, leaven the doleful mood, and give the audience a look at the joy and sadness that coexisted within Hunter. "Singing kept me from feeling too dark and too ugly," she tells the audience. Leaving the Blues addresses this pain, while simultaneously celebrating Hunter's sass, wit, and creative legacy. Alberta Hunter embodied the blues. In turn, they took her on a hell of a ride.

(Leaving the Blues plays at the Flea, 20 Thomas Street, through February 8, 2020. Running time is 2 hours and 30 minutes, with one intermission. Performances are Wednesdays through Saturdays at 7. Tickets are $30. For tickets, call 866-811-4111 or visit theflea.org. For more information, go to tososnyc.org.)