To purchase tickets visit happybirthdaydoug.com, or call the box office at 212-691-1555

Written and Performed by Drew Droege; Directed by Tom DeTrinis
Produced by Michael Urie in association with Zach Laks 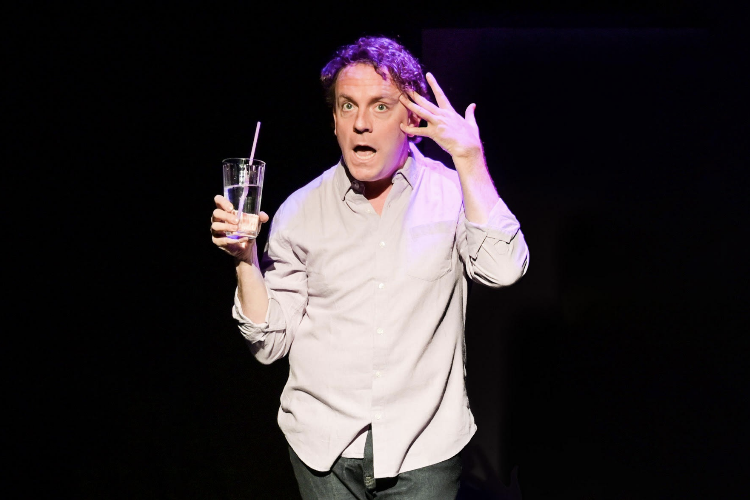 Doug is turning 41, and as city dwellers are wont to do, he’s gathered his best (and not-so-best) Judies (gay male friends, if you need a translation) together at a wine bar. On a Wednesday. They gossip, they bitch, they flirt, they cruise; some leave early, some stay ‘til the bitter end.

The set-up for Happy Birthday Doug is deceptively simple, and will be familiar to those who saw Droege’s 2017 hit Bright Colors and Bold Patterns (available on Broadway HD)—another gathering of gay men on the night before two of them get married. (I’m wondering if Droege will complete a trilogy by setting his next piece at a funeral). The twist in both—playwright Droege plays all the guys.

Whereas Bright Colors and Bold Patterns is occasionally more explicitly political—the title comes from the request to not wear such things, leading to discussions of queer respectability, among other things—the crowd celebrating Doug’s birthday seems, at least at first glance, to be more or less “over” such conversations, more concerned with who is sleeping with who, who let her in, and whether or not the server will get the cocktail order right. And to some extent this is true—those familiar with any number of gay plays that revel in the 3 Ds (drinking, drugs, and dick) will not find much here that is terribly revelatory, content-wise.

But, of course, execution is everything. And this is where Happy Birthday Doug shines. Droege’s attention to the minute details of gay urban life, along with his mastery of physical gesture and facial expression—the way that Droege’s eyes move independently of each other, I swear they seem to have a mind of their own—turn even the most mundane fact into a contender for biggest laugh of the night.

But perhaps most important is Droege’s expertise with a character’s energy. Even before he says a single line, we know immediately where Doug’s ex-boyfriend Steven places himself in the hierarchy of the room. Droege expertly butches up his voice for Brian, the newly out hottie server, and sleazes it up for Devin, the guy who’s slept with half (more like three quarters) of the room. Droege never changes or even alters his clothes, but it’s immediately clear that Devin is A) not all that hot and B) very, very hard to resist.

There are others, including the “sober” Jason, the camp Christopher, and most hilariously, the carbon-copy couple Harrison and Jackson. And yes, there’s even a famous ghost. Those who have pre-gamed will be helped by director Tom DeTrinis’s choice to have each character stand in a different place, along with projections that tell us each person's name. Not that it’s difficult to differentiate these guys from each other (Droege is so good you could probably do this in a darkroom), but since half the time is spent gossiping about someone else, it’s helpful to have the names straight (so to speak).

Happy Birthday Doug is set in L.A., and those unfamiliar with that scene may miss a few laughs. But even if you’ve never heard of Woodland Hills, you can probably piece it together. There is, no doubt, a Woodland Hills in every city. And that’s precisely the point—especially when put alongside Bright Colors and Bold Patterns, Droege is as much skewering as he is celebrating the monolithic nature of white gay male culture. Sure, one critique might be that we never hear from any gay men of color. But this IS a one-man show, and given Droege’s insanely animated performance style, I wonder if asking him to “diversify” his characters might not risk introducing a bit of minstrelsy.

And what’s more, while this is a room full of white gay men, that is pretty much the only thing they have in common. At a time when identity politics has become so relentlessly all-determining, it’s refreshing to be reminded that no cultural group is truly a monolith, and that everyone is—believe it or not—different. Well, except for Harrison and Jackson.

(Happy Birthday Doug plays at the SoHo Playhouse, 15 Vandam Street, through March 29, 2020. The running time is 60 minutes, no intermission. Performances are Thursdays through Saturdays at 9, and Sundays at 3. Tickets are $49 and $59. For tickets and more information, visit happybirthdaydoug.com, or call the box office at 212-691-1555.)

Happy Birthday Doug is written and performed by Drew Droege. Directed by Tom DeTrinis. Produced by Michael Urie in association with Zach Laks.