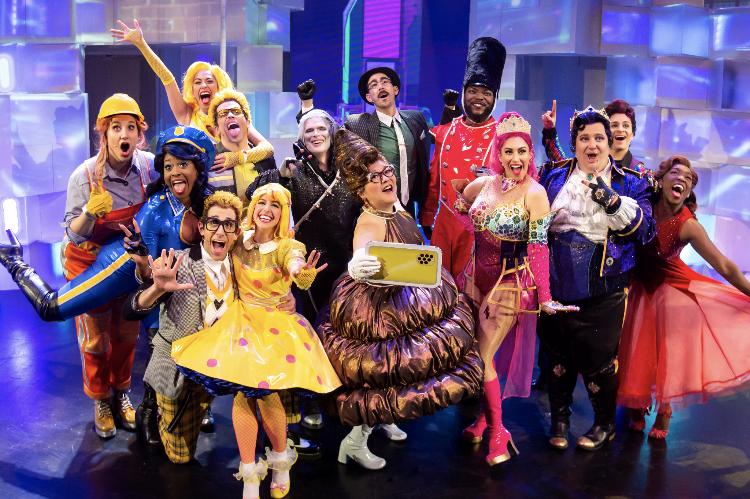 The cast of Emojiland. Photo by Jeremy Daniel.

BOTTOM LINE: The cast of the Off Broadway musical Emojiland is [Fire emoji].*

*Editor's Note: our website currently lacks the capability of showing emojis. We regret this lack of cuteness.

When the cast announcement was released for Emojiland, it read like a joke. George Abud as Nerd Face. Lucas Steele as Skull. Ann Harada as Pile of Poo. But it turned out to be true. These actors who have appeared in Tony-winning and -nominated shows are playing emojis in an Off Broadway musical. And the results are [Thumbs Up emoji][OK Hand emoji].

Emojiland premiered at the 2018 New York Musical Festival (NYMF recently announced it was ceasing operations after 15 years). And once you hear the plot, this origin isn't surprising. Emojiland takes place inside a smartphone that is getting a new software update. New emojis Nerd Face (George Abud) and Prince (Josh Lamon) arrive as part of the update, posing a threat to Princess (Lesli Margherita), who prefers to rule the land alone, and Sunny (Jacob Dickey), whose girlfriend Smize (the show's co-writer Laura Schein), sadder than she looks, takes an interest in Nerd Face. Meanwhile, Skull (Lucas Steele) enlists Nerd Face to help him delete himself because he no longer wants to exist (these emojis deal with some heavy shit). And when Princess and Prince decide to put up a firewall (yes, the metaphor is a little obvious) to keep any more new emojis from getting in, it causes a rift between the couple Police Officer (Felicia Boswell) and Construction Worker (Natalie Weiss).

If that sounds like a lot of plot, it is—too much, to be honest (two hours and twenty minutes is long for a musical about emojis). But it's easy to follow and just when it starts to drag, an energetic musical number picks things back up again (when the cast recording comes out, Margherita's "Princess is a Bitch" should be played in clubs). And while the book and lyrics are already funny (Keith Harrison co-wrote the musical with Schein), it's what the cast does with them that will make you [Rolling on the Floor Laughing emoji]. Lamon and Margherita in particular are masters at line delivery. Abud is the heart of the show as the most three-dimensional 2D character. And then there's the singing. Weiss is a powerhouse, stealing the show with "Stand For." And every time Steele opens his mouth, the only appropriate response is [Smiling Face with Heart Eyes emoji].

Part of the reason you may find yourself attracted to a skull emoji also has to do with Vanessa Leuck's costumes, which are not only colorful, creative, and fun, but flattering on each individual, even the Pile of Poo costume, which Ann Harada rocks. Bobbie Zlotnick's hair and wig design complete the looks. [Clapping Hands emoji] to them both.