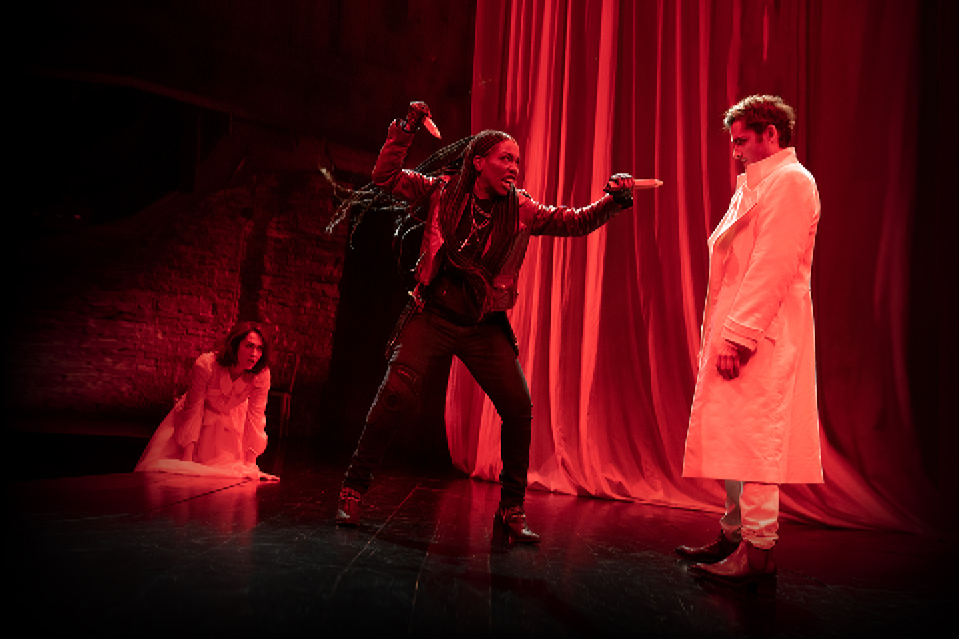 Dracula has been capturing the curiosity of many generations and inspiring countless stage and screen adaptations since its 1897 publication. Author Bram Stoker himself wrote the first stage version, which premiered within a year of the novel's debut. Fast-forward 123 years to Dracula by Kate Hamill, running at Classic Stage Company, and one can’t help but notice how the times have changed.

Hamill (who also appears in the show as Renfield, Count Dracula’s most faithful devotee), puts her signature feminist twist on Stoker’s horror, peppered with humor and wit. Hamil is a go-to adapter of classic novels for modern American theatre; her takes on Little Women, Vanity Fair and Pride and Prejudice showed audiences the importance of critical feminist reading—and that dramatic novels can be sheer fun if dissected skillfully. Hamill’s Dracula continues in that vein, but this time she uses a sledgehammer, or should I say a stake, instead of a scalpel in attacking the sexism of Stoker’s age.

Directed by Sarna Lapine, the play opens with Renfield in a madhouse, re-writing the "Our Father" on a giant sheet to better fit her almighty “father," Dracula. (How appropriate, considering that the actress/playwright is engaged in a similar undertaking.) Changing Renfield’s gender seems fitting, thereby adding the widowed ex-poet to the tale's cast of doomed brides. In the next scene we meet two more misguided women, Count Dracula’s wives, shortly after London attorney Jonathan Harker (Michael Crane) arrives at Castle Dracula and makes the acquaintance of the Count himself (Matthew Amendt). Not only are the vampire brides are given names, Drusilla (Laura Baranik) and Marilla (Lori Laing), they are also given back stories, which they convey to Harker in his bed (nearly the only piece of furniture present on stage throughout the play, courtesy of the minimalist stage design by John Doyle). What used to be a seduction scene balancing on the verge of passion and horor in the novel is now also a cry for help--no wonder that the recently married solicitor is so confused.

Back in England, Mina Harker (Kelley Curran), Jonathan’s pregnant wife, is worried sick over her husband’s insufficient correspondence. Her hosts, friend Lucy (Jamie Ann Romero) and Lucy’s fiancé, Doctor Seward (Matthew Saldivar)—who runs the asylum where Renfield is imprisoned—will also soon be sucked into the bloody mess of Dracula’s affairs. Dracula arrives in London and gradually possesses Lucy’s body and soul, but nobody around her has a clue to the nature of her condition, so Doctor Van Helsing is summoned. To the surprise of Doctor Seward and audience members who didn’t read the program, the Doctor is not a Dutch man, but a woman of color, vigorously portrayed by Jessica Frances Dukes. An uncompromising embodiment of women's empowerment, Van Helsing is a loud slap in the face of misogyny. Dressed in a red leather jacket that stands out against the all-white attire of the rest of the cast (costumes by Robert Perdziola), she immediately steals the show and overpowers even the charismatic Amendt. Hamill’s play might have been called Van Helsing, accurately pointing towards the central character. From the moment she appears, there is no doubt that the feminist revenge will be sweet and it will be bloody.

It seems, at times, that a pregnant woman performing fighting moves borders on camp, and there is one too many lines about wives’ fates depending on the kind or ill nature of their husbands. But nobody walks away without a clear understanding of what this Dracula is about. This adaptation screams bloody murder about female angst, heterosexism, toxic masculinity and the search for freedom inside and outside traditional roles assigned to women.

(Dracula plays at Classic Stage Company, 136 East 13th Street, through March 8, 2020. The running time is 2 hours 20 minutes with an intermission. Performances are Tuesdays through Fridays at 7; Saturdays at 4; and Sundays at 2, alternating with Frankenstein. Tickets are $80 - $125; special two-show packages to Dracula and Frankenstein are $130. Tickets are available at classicstage.org or by calling 212-352-3101.)