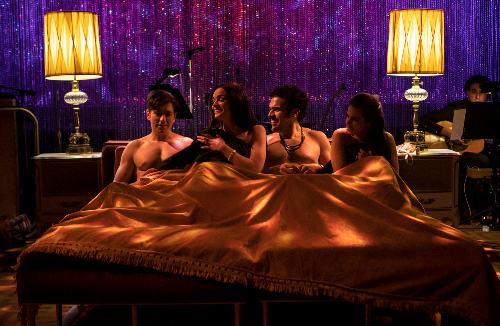 BOTTOM LINE: Despite a talented cast and a creative team that includes Duncan Sheik, the musical adaptation of the 1969 movie is a snooze.

It's never great to leave a show thinking, "Whose idea was it to turn that into a musical?" But that's what might happen if you see Bob & Carol & Ted & Alice. Though the 1969 movie was nominated for four Oscars, it isn't as referenced today as other films from that era. With Duncan Sheik writing the score, the potential seemed to be there. Unfortunately, the songs are mostly expository, seldom moving the story forward or offering insight into the characters, which should be the point of having music in musicals.

The characters are, as you might have guessed, Bob (Joél Pérez), his wife Carol (Jennifer Damiano) and their friends Ted (Michael Zegen) and Alice (Ana Nogueira). The plot follows the same events as the film by Paul Mazursky and Larry Tucker (they also created the TV show The Monkees, which would probably have been a better idea for a musical). After Bob and Carol go on a retreat, they decide to be completely open. When Bob has sex with another woman on a trip to San Francisco, he tells Carol, who says she is ok with it because of his honesty. And then Carol can't wait to tell their best friends, to Alice's horror. The most engaging scene is between Ted and Alice in bed after Carol's big announcement; as a result, Zegen and Nogueira come off a little better than Damiano and Pérez, but the cast can't be blamed for the show's problems. Suzanne Vega rounds out the cast as "band leader," a narrator/voice of other secondary characters. She does what she can, but I'm curious what Sheik would have been like in the role, since he was originally supposed to play it.

Not that this would have made much of a difference. Director Scott Elliott's choices defy reason. For a show that's mostly about sex, it's dull and completely unsexy. And for some reason, there is unnecessary audience interaction. Occasionally, those in the first row are asked to join the actors onstage (you are allowed to decline, and many do). They don't have to do much besides sit there and then go back to their seats (though some must slow dance with the actors), so it just wastes time and takes you out of the moment.

Jeff Mahshie's costumes and Derek McLane's sets will set you firmly in 1969 (when you're not being distracted by the returning audience members taking too long to settle back into their seats). And while Sheik's score also sounds appropriate for the time period, it's his least interesting, far inferior to Spring Awakening. Although he's been cranking out musicals lately. This is his third NYC show in a year (after Alice By Heart and The Secret Life of Bees) with another on the way (Whisper House comes to 59E59 in March), so perhaps his focus was divided. There's always next time.