The Young Man From Atlanta 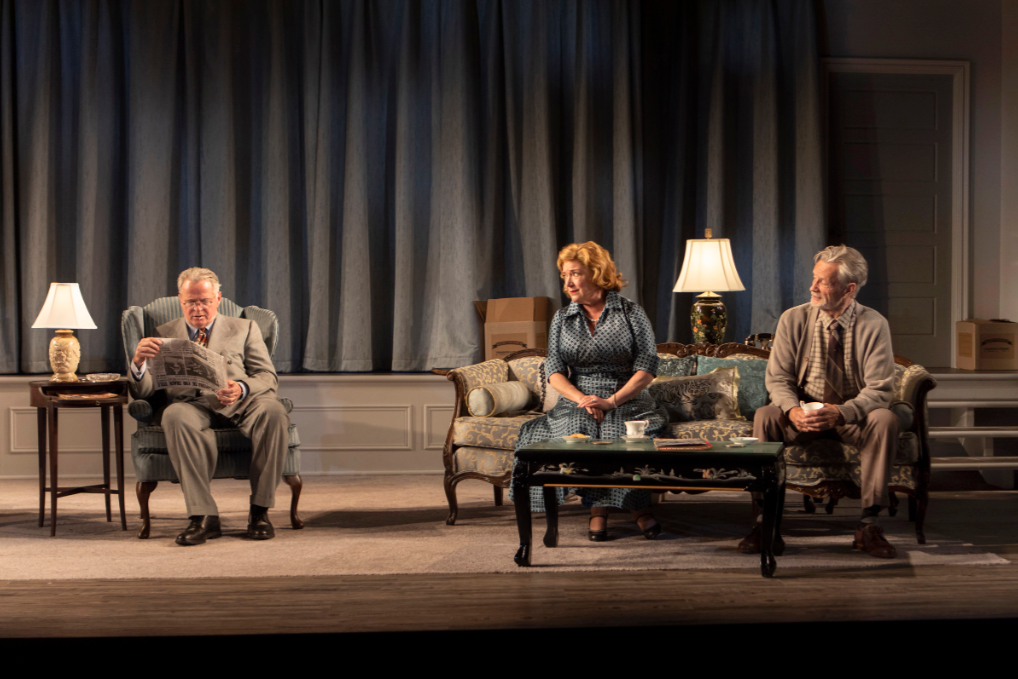 BOTTOM LINE: This revival is a contemplative, funny, and understated exploration of grief, ageism and white privilege in 1950s Texas.

For those who know the works of Horton Foote, Will Kidder is a familiar presence. He’s been part of the Lone Star fabric that Foote often returned to, and appears (as a younger version) in plays like Lily Dale and Cousins (both part of The Orphans' Home Cycle). But even if you’re new to the playwright’s semi-autobiographical Texas, Kidder is recognizable as an archetype of a bygone era: the overconfident, successful businessman who exists in a simple, entitled state of satisfaction, and who gives his life to a company that doesn’t reward such loyalty.

In The Young Man from Atlanta, Kidder (Aidan Quinn), now in his sixties, faces the prospect of the unknown on all fronts. There's his son Bill’s sudden drowning death six months before, his heart troubles, and the abrupt dismissal delivered by Fred (Devon Abner), son of the founder Will worked alongside for decades, when he helped to keep their wholesale grocery company prosperous during the Depression. Worse, Tom (Dan Bittner), the man Will hired and trained, is getting his job. But neither Tom nor Fred are villains—they try to help by offering him a new job (“with less responsibility”) and drop off the pay Will had rashly refused when he immediately quit. Waiting for him in the enormous (“the biggest and the best”) house he’s just had built is his wife, Lily Dale (Kristine Nielsen) and their housekeeper Clara (Harriet D. Foy). Even with Lily Dale’s step-father Pete (Stephen Payne) staying with them and a visit from Pete’s nephew Carson (John Orsini), it’s too much house.

Lily Dale's grief over Bill's death is more palpable than her husband's, but she’s alone with it, since she and Will don’t speak about it. So she seeks solace in prayer and is fixated on the Houston "Disappointment Club" (an action in which black housekeepers fail to show up before an important event) and Eleanor Roosevelt, who allegedly orchestrated these clubs. She’s also found a more tangible outlet and some comfort in the company of Randy, a 20-something man who had been Bill’s roommate in their Atlanta boarding house. Randy has told her that Bill used to pray so much that they would hear him all over their residence, news that she clings to. Although Randy is never actually on stage, his presence ricochets off both Will and Lily, both unable to admit the truth about their son.

At times I found Foote’s writing to be too opaque in all the things he leaves unsaid, especially in his portrait of Lily Dale. If not for the period of mourning, it appears there’s little occupying her thoughts beyond scripture, the piano that has sat untouched for six months, her conversations with Clara, and the Disappointment Club. There are also some frustrating revelations from her that come out of nowhere, as if from another play. In the end, are we meant to look upon her with empathy, pity, or something in between?

It seems Foote is making a subtle commentary on race too, but just barely below the surface, when Will and Lily's now-retired, former housekeeper Etta Doris (Pat Bowie) shows up. She recalls to Will (who doesn’t remember her, of course) their old house and Bill as a blonde-haired, friendly child. It’s a poignant moment, as Will’s bottled up anguish finally gets a release. In a throwaway moment, Lily Dale asks Clara how Etta Doris has gotten to their new place and Clara explains that she came by bus and still had to walk four blocks with her cane. Without any further concern, Lily Dale announces she’s going downtown and Etta Doris is on her own.

Though Foote overstuffs the play with too many characters, the cast, directed by Michael Wilson, is excellent in roles that force them to be restrained in the face of powerful emotions. Davenport is easily believable as a kind step-father, his much-needed generous spirit an antidote to the increasing tension and hostility in the house. Nielsen brings a funny and touching guilelessness to a tricky part. And the perennially handsome Quinn holds the show together in a soulful, wrenching performance, as bleak shifts in Will’s world repeatedly pierce his heretofore charmed bubble.

The Signature Theatre Company is to be celebrated for honoring American playwriting. And though not without its flaws, The Young Man from Atlanta is also a beautiful production, thanks to the period perfect set design from Jeff Cowie and costumes by Van Broughton Ramsey.