Tickets were available at bam.org 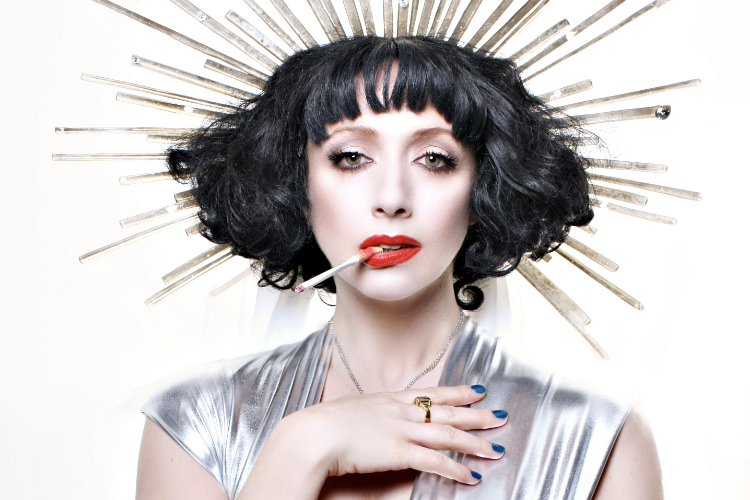 Fresh off of a European stint of her tour in support of her new album, cabaret performer Meow Meow (stage name of Australian-born chanteuse Melissa Madden Gray) holidazzled up her usual show to grace Brooklyn just before the holidays with A Very Meow Meow Holiday Show (performed as Meowpocalypse Now: A Crisis is Born in Europe and Australia).

Decked out like a tarted-up night club singer doing The Virgin Mary, with a pregnancy bump, gold lame dress, and starburst crown, Meow Meow starts the show with a cigarette in her mouth, two in her fingers, and an inflatable donkey. She quickly puts the male audience members to work inflating her menagerie scene, adjusting her wardrobe, and assisting her as she strolls through the audience stealing purses, coats, and phones (all in good fun).

The production opens with a litany of disasters: instead of a beautiful holiday backdrop, Meow Meow is left performing in front of a construction site. Her celebrity guest stars Jake Shears, Rufus Wainwright, and Alan Cummings all cancel, giving such shoddy excuses as a hangover, a knitting emergency, and opportunities to collect more awards. Feeling hopeless, Meow Meow is left wondering how to fill up time. Finally, she cons the poor orphans caroling at the stage door into performing in her show.

Rather than traditional holiday fare, she sings an eclectic mix including 90’s rock tunes reworked into holiday versions including Nick Cave’s “Red Right Hand” (turned into a song to scare the orphan children about Santa being ever-present) and Radiohead’s “Fake Plastic Trees.” Later, In an impressive feat, Meow Meow crowd surfs over the giant theater, asking the audience to push her breast back into her dress should a nipple happen to pop out. The show isn’t all comedy, however, with Meow Meow singing an original number about the pain of missing out on motherhood and later being relieved of her cynicism and superficiality (in a Scrooge-like epiphany scene) by remembering her childhood ballet dreams that never came to fruition.

Meow Meow is a hilarious, dazzling, and enigmatic performer. She shows skill both in her vocal abilities and musicality as well as in being a captivating performer with a knack for comedy. Spitting in the face of typical holiday goodwill, Meow Meow is a Scrooge-like character—self-absorbed, shallow, narcissistic, and greedy—as she openly steals from the audience to create her own holiday happiness. Her holiday show is just the right balance of jaded cynicism mixed with holiday joy and wonderment, making it well suited for those tired of the more traditional (i.e., sentimental) holiday fare. Her reliance on audience interaction (mostly with male audience members) helps to keep the show lively and the audience fully present throughout this dazzling, roller coaster of a show.

If you missed out on Meow Meow’s brief stint in Brooklyn, don’t despair! Her tour in support of her newly released album is continuing indefinitely (with a non-holiday version of her cabaret show); there are upcoming dates in both Europe and the US. (She also has, quite appropriately, a role in the recent film Cats). Hopefully, Ms. Meow Meow will be back again on this side of the pond to grace us with both her voice and her comedic wit.

(A Very Meow Meow Holiday Show played at the BAM Harvey Theater, 651 Fulton Street, December 12-14, 2020, although Meow Meow's world tour continues indefinitely in support of her new album. The running time was 85 minutes without an intermission. Performances were Thu 12/12 at 7:30, Fri 12/13 at 7:30, and Sat 12/14 at 7:30 and 10. Tickets were $25-$85 and were available at bam.org. For more information about Meow Meow and her current tour dates visit meowmeowrevolution.com.)