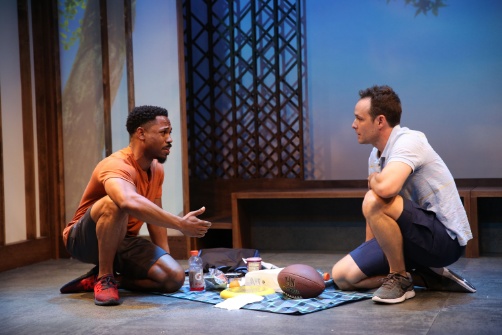 BOTTOM LINE: This mixed bag of short plays are of vastly differing tones and styles, but all seem to focus on conflict in close relationships and are enjoyable in different ways.

The second set of short plays in this year's Summer Shorts Series at 59E59 are not as overtly thematically linked as Series A, but all seem to hone in on the personal conflicts that arise in close relationships: two of the pieces involve married couples and one concerns long-time best friends.

Lucky is set in post-World War II America. Phil (Blake DeLong) has come home from the war, but unable to resolve the turmoil in his head, instead of rushing back to his old life with his young wife Meredith (Christine Spang), he chooses a nomadic existence. Meredith struggles to understand how her husband no longer seems to be the same person. Sharr White's script is slow to begin, but the dramatic moments are compelling and the actors make this piece captivating.

The light-hearted Providence focuses on married couple Renee (Blair Lewin) and Michael (Jake Robinson) who are spending the night crammed into Michael's childhood bed. Neither can sleep and Renee is fixated on her imminent period, flabbergasted that there is not a single 24-hour store in Providence, Rhode Island where she can buy some tampons. Dim-witted groom Pauly (Nathan Wallace) is also awake, suffering from wedding day jitters. He asks the couple what he should talk about with his new bride; meal plans are currently their main topic of conversation. But Pauly's doubts open up cracks in Renee and Michael's relationship, as Renee reveals that she was never sure that Michael was "the one." Providence is certainly amusing and playwright Nancy Bleemer has an ear for witty dialogue. But compared to the other two, this one is far more superficial.

Last is Neil LaBute's Appomattox. A Summer Shorts veteran, LaBute is adept at making the most of the short form and Appomattox focuses on his strong suit: onstage conflict that quickly builds to a boil. A picnic lunch between friends soon turns sour when Joe (Jack Mikesell), who is white, says he is touched by the gesture of Georgetown University students who want to willingly increase their tuition in order to offer money to the descendants of the slaves who were once on their campus. But Frank (Ro Boddie), who is black, sees the small amount of money as a relatively minor gesture in the face of the horrors of slavery. So the two argue over what amount of money could ever possibly begin to compensate for history.

Appomattox becomes interesting when Frank asks Joe to drop the subject. This being a Neil LaBute play, Joe foolishly pushes on until Frank reaches a breaking point. LaBute succeeds in tackling the subject of slave reparations in a manner that never becomes overly preachy or PC, while also offering insight into heterosexual male friendships. And the two actors Boddie and Mikesell, under the direction of Duane Boutté, create authentic tension as the argument builds.

Overall, the plays in Series B are worth seeing, but perhaps not quite as engaging as the darker, death-tinged works of Series A.