By Aaron Posner, based on The Seagull by Anton Chekhov. Directed by Joshua Warr
Produced by Art of Warr Productions 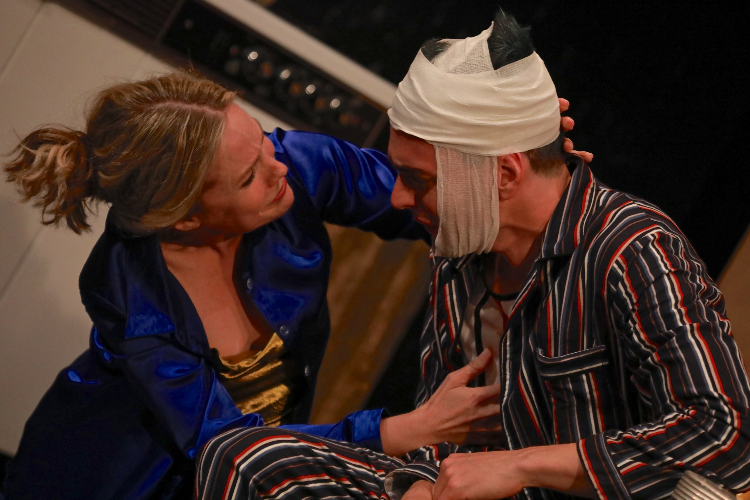 BOTTOM LINE: This updated, deconstructed Chekhov adaptation keeps it real with profanity and a tragic sense of life.

Aaron Posner’s timely deconstruction of Anton Chekhov’s symposium on art (meaning The Seagull, hence Posner's title) is running in repertory with Darlene Caviotto's Pizza Man at 13th Street Repertory Theatre. Joshua Warr and his company Art of Warr Productions, a Certified LGBT Business Enterprise, are producing both plays, which open a debate about the way humans treat each other. Whether it’s a tragic love story or a history of male domination, there is certainly a lot of ground to cover in these works. Stupid Fucking Bird runs almost three hours, but the good news—I was never bored, and always on the edge of my front-row seat. I recommend sitting there, so you can fully engage with the performers. Indeed, the first line was “The play will begin when someone says, Start the fucking play!”

If you think plays are artificial, you will enjoy the way Posner's characters announce each new setting and get frustrated when they even think about employing ancient conventions. Even if you don't know Chekhov's work, you will get to meet a variety of artsy characters, albeit non-aristocratic 21st-century ones who have paying jobs. Mash (Alexandra Riley Morton) wears a lot of black, plays the ukulele, and is a bit depressed. The good-natured Dev (Brendan Ellis) adores Mash, but she ignores him because she is fixated on experimental theater revolutionary Conrad (Blake Merriman). “Connie,” who goes through the play wearing several sets of striped suits and striped pajamas, may be a little out of touch with reality, yet he clearly knows how he feels about aspiring actress Nina (Julia Blanchard). Out of fear of losing Nina, Connie shoots a seagull, which he calls a "stupid fucking bird."

Connie may have turned out this way because of the frivolity of his mother, the famous actress Emma (Maia Guest). Now, Emma is with Trigorin (John Calvin Kelly), a dashing, older writer of great reputation. Trigorin's relatively calm demeanor is due to his use of the hundred-year test: will anything we say/do/write matter in 100 years? (It's now over a hundred years since Chekhov, FYI.) Connie may be losing Nina to Trigorin, Mash still loves Connie, and Dev still loves Mash. As Connie's uncle Sorn (Kevin Gilmartin), a physician and the only level-headed non-artist in the play, exclaims in bewilderment, "So much feeling!" And in a move akin to Chekhov, Connie shoots himself and survives. But it's only the end of Act One.

In Act Two, Connie, head bandaged, takes a snack from the refrigerator as he says to the audience “The only thing worse than trying to kill yourself and failing is having to talk to your mother after trying to kill yourself and failing.” Is Connie's frustration with his affluent life his mother's fault? Who really feels good about their life? Not, apparently, Dr. Sorn, who uses that as motivation to heal others. Mash sings twisted love songs (original music by James Sugg) and contemplates marrying Dev. Trigorin and Nina run away together, so Emma is not happy either. I suppose the main contrast with Chekhov is that the art these characters make is not intended to change the world, and they're still unhappy. Connie opines "My art has as much chance of changing the world as...Congress."

Four years later in Act Three, the characters come together to celebrate Sorn's 70th birthday. Dev and Mash are married with three children. Nina and Trigorin split up after losing their baby, so Trigorin is back living with Emma. Nina is now a prominent actress, in crime shows, and doubts her authenticity. And Connie's play about his family drama, Stupid Fucking Bird, is now playing in the city. Is there hope that making art transforms people, if not the world? Apropos of fatherhood, Dev rebukes the sad Connie with "Try loving something more than yourself!" to which Connie replies "Are you kidding me? I love almost anything more than myself." Does Connie still have suicidal tendencies? Can we break free of what is expected of us?

I admire the writing and directing in this provocative show, which is very much for our century. Todd Trosclair's costumes—goth, feathered, and striped—announce that we have moved on from the modern. And there's a lot of room in this play to explore different types of human relationships. Joshua Warr's direction allows for a lot of alienation and numerous moments of palpable tenderness. The cast all work hard, but the mother and son fights between Maia Guest as Emma and Blake Merriman as Conrad are especially memorable. John Calvin Kelly as Trigorin has that untouchable, chill smugness found in the rich and respected, yet delivers some profound insights, as does Kevin Gilmartin as Sorn. Alexandra Riley Morton as Mash displays some ukulele-driven combativeness, which she reveals to be layers of armor that she can add and remove. Julia Blanchard as Nina shares with us the terror of success and the ever-increasing doubt which some might not choose to face.