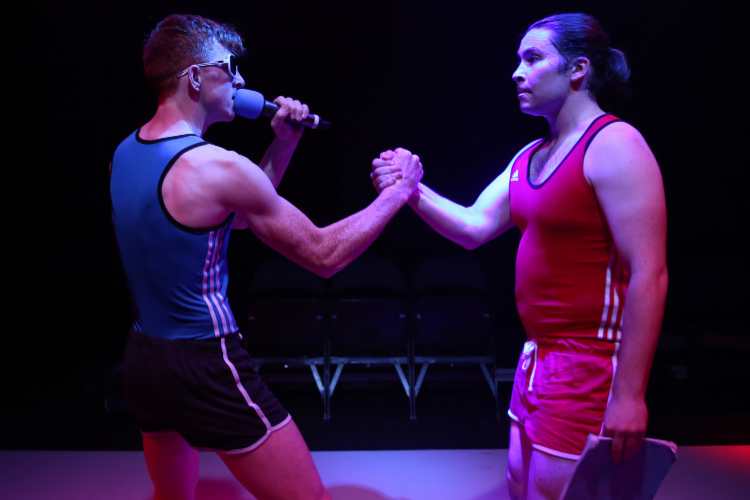 BOTTOM LINE: Go for the Scottish accents. Stay for the timely insights into male adolescence.

Sitting in a tiny theatre in the round (well, more like in the square) with only two rows of seats on each side, when the house manager says that audience participation is encouraged right before the house lights go down, you may experience a sinking feeling in your stomach. But don't let that scare you away from Square Go, an entertaining hour-long play that sneaks up on you with its perceptive observations about male adolescence. And to top it off, there are Scottish accents.

Part of 59E59's Brits Off Broadway series, always a highlight this time of year, Square Go is a two-hander starring Daniel Portman (Podric from Game of Thrones) and Gavin Jon Wright. Max (Portman) is about to experience his first square go (a fight at the school gates) and his best mate Stevie (Wright) is helping him prepare, both mentally and physically. That's the whole premise. But as they talk to the audience and each other, they reveal more and more details about Max's relationship with his alcoholic father, about the bully who challenged him to the square go (a kid with his own demons to wrestle), about the VHS tapes of professional wrestling that Max watches, and more. These details add up to a picture of the pressure to be men that adolescent boys feel, and how dangerous it can be when they don't have the right role models. Max is a sensitive kid, and you want to tell him to just be himself and everything will be ok. Then again, there are scenes in which fights are acted out, and the audience is encouraged to cheer. It's easy to get caught up in it and yell "Max! Max! Max!" It's fun, but then you stop and think "What are we cheering for? Are we part of the problem?"

All of this is accomplished without Square Go ever feeling like a message play, or anyone actually having to use the words "toxic masculinity," thanks to the writing of Kieran Hurley and Gary McNair. Square Go features dialogue that you could imagine Scottish schoolboys actually saying. Portman and Wright are clearly much older than their characters, but they capture the spirit to make this believable without resorting to the annoying, over-the-top mannerisms as sometimes happens when adults play children. Finn Den Hertog's direction, aided by Vicki Manderson's movement, makes you feel like you're at a wrestling ring, especially when combined with Peter Small's lighting and a pulsing soundtrack by members of the Scottish band Frightened Rabbit. Square Go only runs until the end of the month. And with tickets only $25, what do you have to lose?

The cast is Daniel Portman and Gavin Jon Wright.