Book and Lyrics by Steven Sater; Music By Duncan Sheik; Based on the play by Frank Wedekind; Directed by Nick Brennan; Choreographed by Shiloh Goodin 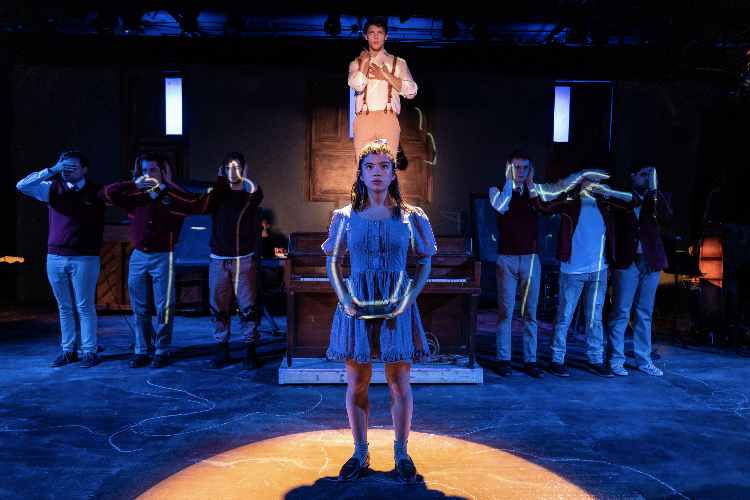 The cast of Spring Awakening. Photo by Steven Pisano Photography.

The original production of Spring Awakening closed on Broadway in 2009 and the powerful Deaf West revival opened just six years later in 2015, so it's probably not going to be on Broadway again for a while. But if you missed both of those, or if you are always down to see Duncan Sheik and Steven Sater's musical (full disclosure: I'm in the latter category), Brooklyn's indie theatre gem the Gallery Players is currently presenting a production that calls to mind elements of both of those, while adding some fresh ideas.

Spring Awakening, based on Frank Wedekind's 1891 play, always showed the similarities between the 1890s and the present day. Although set in 1890s Germany, teenagers whip out microphones to express their feelings in contemporary song—and it feels timelier than ever. [If you've never seen the show and don't want to know what happens, well, you've been warned—just stop reading and buy your tickets now.] The musical centers around the sexual awakening of Wendla (Gaby Greenwald) and her childhood friend Melchior (Taylor Bloom); Wendla, never fully understanding where babies come from, becomes pregnant and then later dies from a botched abortion. It's difficult not to picture teenagers in this country going through the exact same thing as abortion bans become more prevalent.

The Gallery Players obviously doesn't have a huge budget, but on William Miller Anderson's set, nothing goes to waste. The famous sex scene is staged on top of a piano. Actors draw on chalkboards, emphasizing how powerful the written word is to the story. After all, Melchior writes Moritz (Harrison Bryan) an essay that sets most of the events into action. When Moritz kills himself, instead of taking out a gun, he crumbles a piece of chalk in his hand. One misstep, however, is the use of projections that are too literal (like flowers blooming). The chalk drawings work so much better and make the projections redundant.

Director Nick Brennan has made some smart choices, such as staging all the scenes with the adults (all played by Osborn Focht and Mikaela Kafka) above the stage, even when the characters are in the same room as the teenagers, further illustrating the enormous distance between them. The only time an adult goes down to the lower level is during "Left Behind," when at his son's funeral Moritz's father finally opens his eyes to what his child was going through, and it's especially effective.

For the most part, the singing is stronger than the acting (Bryan, for example, is a little too exaggerated with his mannerisms), but given the beauty of Duncan Sheik's pop score and AnnMarie Milazzo's vocal arrangements, that's not the worst thing in the world. The best scenes are the ensemble numbers, made even stronger by the band and Shiloh Goodin's choreography that is reminiscent of Bill T. Jones's without being a carbon copy.

During the time I've lived in Brooklyn, the Gallery Players has introduced me to musicals I might not have had a chance to see otherwise, like City of Angels and The Baker's Wife, and I hope it does the same for audiences who have never seen Spring Awakening. Tickets are relatively affordable, which makes it easy to support this theatre company, but it's a short run, so see it while you can.