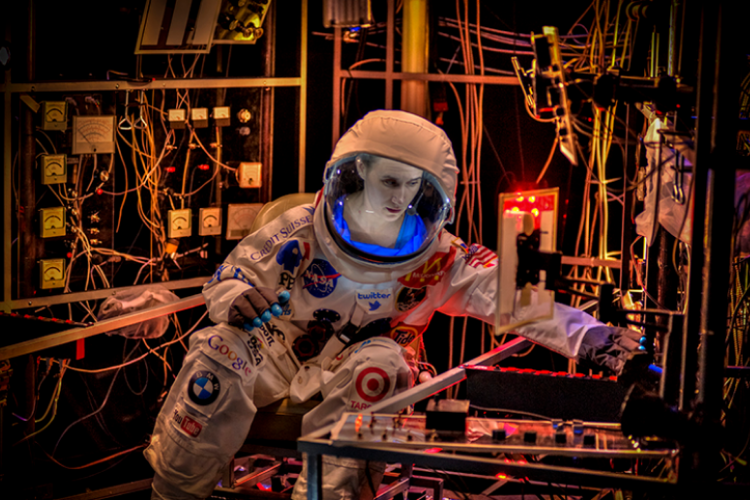 BOTTOM LINE: The set, sound, and lighting design of Spaceman are out of this world, pun intended.

Last year after the first performance of Spaceman, Erin Treadway, the star of this mostly one-woman show (there is also a puppeteer, Shawn Davis), broke both her arms and the run of the show was cancelled. All's well that ends well and the play is back at the Wild Project for a full run with Treadway's arms recovered.

It's brave of Treadway to go back to this show—I'd be scared performing on that elevated floor-less set even if I hadn't recently gotten over an injury (though it wasn't the set, but a speaker, that caused her accident). Carolyn Mraz's intricate scenic design creates the inside of a spaceship as Treadway plays Molly Jennis, an astronaut on a mission to Mars. And the feats of design are extraordinary, especially for an Off Off Broadway production. The set, combined with playwright Leegrid Stevens' sound and Simon Cleveland's lighting, is so realistic that it makes the stakes feel appropriately high. At times it feels like the theater is shaking from the sound. In addition Davis, hidden in the background, lifts objects so they appear to be floating in space, which adds to the authenticity, as does the spacesuit (Heather Carey is the costume designer), and Treadway's convincing performance.

As for the play itself, it starts off strong, but goes on too long. There are several places it could have ended, with some overly melodramatic moments, like those dealing with Molly's backstory about her husband. Watching the day-to-day of Molly's time in space is drama enough (Stevens must have done extensive research), especially when it comes to the questions she has to answer from reporters and students. But if you're interested in technology and design, you're not likely to have a chance to see a show like this again, especially in such a small theater, anytime soon.

The cast is Erin Treadway.