Off Broadway, Play
Runs through 5.26.19
The Public Theater, 425 Lafayette Street 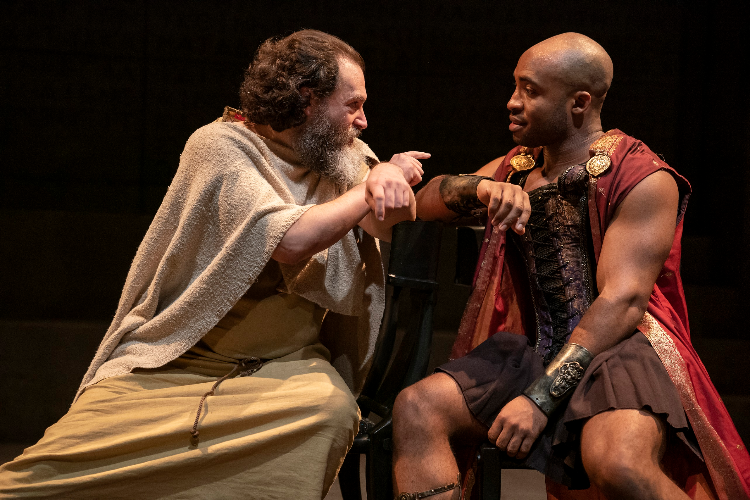 BOTTOM LINE: A feast for those who get off on debate and ancient history, but a letdown for those seeking theatrical adventurousness.

The Public Theater describes itself (in a bio that's always printed first in its shows' programs) as "theater of, by, and for all people." No wonder it's joined with the Onassis Festival to present works examining and celebrating the 2500-year-old history of democracy. Socrates, a new play by Tim Blake Nelson (best known for his acting, in films by the Coen Brothers and others), is an ideal fit for this project, and star Michael Stuhlbarg and director Doug Hughes bring major prestige to the production. The result is an avalanche of words and ideas that is almost exactly what you'd expect from a play called Socrates—no more, no less.

Born in Greece in the 5th century B.C.E., Socrates' influence on Western thought is enormous—ironic, considering he never wrote any of his own ideas down. His legacy is largely based on the writings of his acolyte Plato (played by Teagle F. Bougere), who here serves as a sort-of narrator for the drama, sharing his memories of the man with a young student (Niall Cunningham). History nerds will get a kick out of seeing events and people they've read about in Plato's dialogues and other sources brought to life, particularly the larger-than-life general Alcibiades (Austin Smith) and the freethinking patrician Crito (Robert Joy). Even among these and other friends, Socrates sticks out like a sore thumb: humbly dressed, never drunk or lascivious, and always pissing someone off with his incessant questioning.

We watch as Socrates makes more and more enemies throughout Athens, enraging men of all social classes by pointing out their hypocrisy and self-delusion. He even dares to question whether the city's democratic system, of which it is extremely proud, is truly democratic, given that a wealthy elite holds disproportionate power and many Athenians own slaves. Socrates' questions are, clearly, Nelson's as well, and the parallels to American history and current events are unmistakeable and, frankly, pretty damn depressing.

Stuhlbarg, an actor who can accomplish with one eyebrow what others can't do with their entire bodies, is perfectly cast as the brilliant, uncompromising title figure, and keeps us invested in the action despite the fact that a) his character remains steadfastly, maddeningly the same no matter the consequences and b) his fate is never in doubt. (If you somehow avoided that information until now, you're in for a humdinger of an ending.) The play may be called Socrates, but Socrates isn't really its protagonist. In fact, he's closer to the antagonist, forcing Athens, and us, to confront the fact that for all its promise, government of, by and for the people has one big drawback—people.

Like the man whose life inspired it, Socrates is in love with words and ideas and will not appeal to those looking to sit back and relax. Unlike him, the play is more or less conventional in its technique. A wordy, straightforward drama based on European history and populated almost exclusively by men (though the casting is colorblind), it's an odd offering from the Public. If you're expecting something more adventurous or boundary-breaking, you might think of skipping this one. But if all you need is a timeless debate organized around a stellar central performance, go ahead: let Michael Stuhlbarg school you.

(Socrates plays at the Public Theater, 425 Lafayette Street, through May 26, 2019. The running time is 2 hours 45 minutes with an intermission. Performances are Tuesdays through Fridays at 7:30 and Saturdays and Sundays at 1:30 and 7:30. Tickets are $20 - $85 and are available at publictheater.org.)