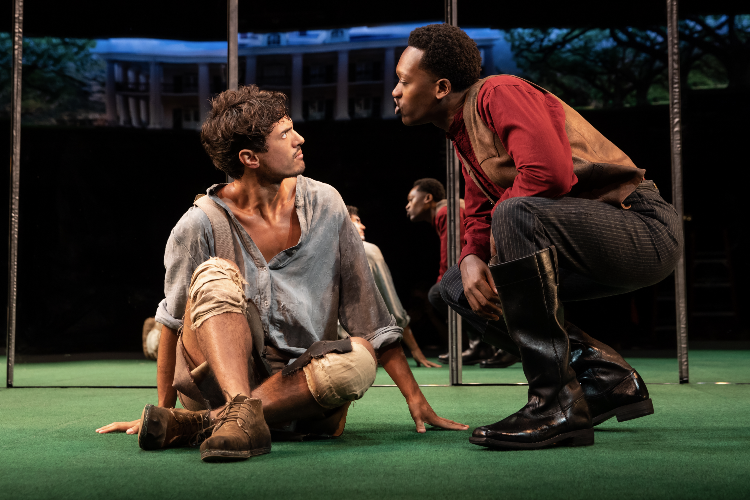 BOTTOM LINE: Slave Play may be a hot ticket among theatre cognoscenti, but don’t feel bad if you leave underwhelmed (or worse).

[Editor’s note: It’s difficult to discuss Slave Play without revealing some pretty big spoilers. So, you know, be warned, starting with the third paragraph.]

Slave Play was a big hit with New York’s critical establishment last year—they called it “provocative,” “daring,” “transgressive,” “disturbingly funny”—the list of superlatives goes on and on. No doubt many reviewers this time around will feel the same—not much has changed, aside from one cast member and the usual Broadway design upgrades. So if you want to check it out to join the conversation, that’s fair. But to my mind, this Broadway transfer only confirms my initial reaction at New York Theatre Workshop—the emperor has no clothes.

We begin on a plantation, albeit one with a lot of mirrored walls (I’ll come back to those), where three interracial pairings—Kaneisha and Jim (Joaquina Kalukango and Paul Alexander Dolan), Phillip and Alana (Sullivan Jones and Annie McNamara), and Gary and Dustin (Ato Blankson-Wood, James Cusati-Moyer)—are starting to get nasty—Fifty Shades of Tara, perhaps. We essentially see the same scene three times—it’s just the toys that change.

But if you suspect something is off—perhaps because of Alana’s knee-high patent leather boots, or Jim’s periodic dropping of his Southern drawl, or that large black dildo mentioned in the program notes—you are correct. While Slave Play is set on a plantation, it’s also set in modern times, and these couples are on day four of “Antebellum Sexual Performance Therapy.” The goal, according to psychologists Teá (Chalia La Tour) and Patricia (Irene Sofia Lucio)—also an interracial couple (natch)—is to address the black partner’s “racialized inhibiting disorder, or RID” which causes anhedonia (the inability to experience pleasure) and disinterest in sex. In short, as Phillip puts it: “the reason I can’t get it up is…racism?” And in the world of this play, Phillip—the hot dumb jock (that’s his function)—is right. Racism is the sole problem. Who knew it was this easy?

Now look. White people are often terrible, and racism manifests in all sorts of insidious, sneaky ways. I’m all for calling out white folk on their unacknowledged biases. And I’m totally on board with digging in deep to investigate how America’s original sin of slavery continues to reverberate in tragic ways almost 200 years after it ended. But to my mind, if you’re looking for deep investigation, you won’t find it in Slave Play.

The problem is that Harris takes what might be an interesting premise (I’m still not sold) and gives it the glib, here’s-a-lot-of-jargon-aren’t-I-smart treatment. He stuffs it full of jokes about easy targets in today’s identity-politics-driven society. And he begins it with sex scenes that give the appearance of being “provocative” and “daring.” But what he doesn’t do is create any type of complex characters, or any type of complex anything.

These characters, to a one, are defined solely by their race—we barely know anything else about them. We do learn a bit about the white characters—Dustin’s an actor (which of course is hilarious), Alana was married before, Jim is British. But rather than help make them more complex, these sparsely sketched backgrounds become one more reason to demonize them. And that isn’t a metaphor. The group therapy session of Slave Play culminates with Kaneisha, who has long been resistant to verbalizing her frustration, finally breaking down as she comes to the realization that her partner Jim—by virtue of his race—is “a virus” and “a demon.”

Slave Play fits into the idea of “Grievance Studies,” a term that flags how some academics (largely in the humanities) tend to reduce various forms of oppression to the question of identity. (I feel terrible, and it’s your fault, because you’re different from me.) The problem, of course, is that oppression (not to mention psychosexual dysfunction) is never attributable to just one thing (or one person)—it arises out of a complex nexus of race, class, gender, sexuality—the list goes on. But such complexity isn’t what Harris is interested in. In his world, the black characters are inevitably traumatized (even if they don't know it yet) because they are black.

And it isn’t just that Gary, Phillip, and Kaneisha are traumatized—that’s all they are. Phillip plays classical violin, but rather than giving this character some complexity (the hot black guy plays basketball and Beethoven!), it merely becomes one more symptom of his illness (apparently RID is characterized by a musical mania of sorts). And the white characters—no matter what they might do, or have done—are the source of this trauma. Each is to blame for their partner's problems, because they—solely due to their whiteness—are the virus.

Sure, I know, Slave Play is satirical. Yeah, it’s supposed to be a play “about ideas,” so who cares if the characters are paper-thin. And as some critics have suggested, Harris is perhaps not targeting interracial couples per se, but the broader American social fabric, blah blah blah. But while that all may be the play people want to see, that isn’t the play Harris wrote. (The absence of any kind of class-consciousness is especially noticeable, although that’s perhaps not surprising.) There is no broadening out—these characters are all so incredibly self-absorbed, so single-mindedly focused on their own pain and/or disavowal of their own complicity in someone else’s, that there is no hope of expansion, much less social change. They barely even stop to think about themselves as part of a couple, much less a broader community. (I guess there’s the chance this solipsism is an intentional part of the satire, maybe meant to skewer the stereotype of the self-absorbed millennial? Nah—I think it’s just Harris’ M-O.)

I’m not surprised Slave Play is popular with tastemakers—Harris clearly knows how to write a play that “seems” important and topical, and progressives (especially white progressives) love seeing stories about how terrible white people can be. They revel in the “difficult experience” they are being asked to sit through. But there’s superiority at work in such enjoyment, which tends to curb any kind of deeper self-recognition. There are mirrors on the back wall of the set, clearly intended to get us in the audience to “see ourselves” (Slave Play is many things, but subtle isn’t one of them). But while the view is clear enough before the show, the lighting obscures the reflection during the piece—the audience sinks back into darkness. Even if we wanted to look at ourselves, the play doesn’t allow for that. But come on, is anyone in the audience really taking stock of their own complicity in oppression? Especially outside of a racial lens? Of course not. That’s not really the point.