Off Off Broadway, Experimental Theatre
Runs through 3.23.19
Next Door at NYTW, 83 East 4th Street 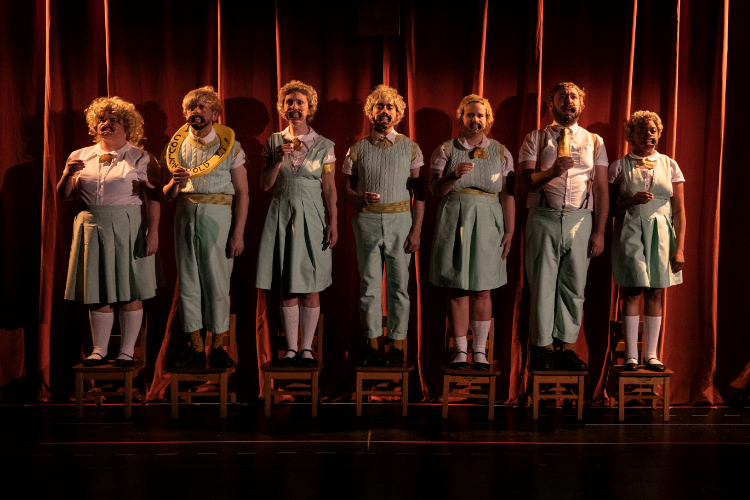 The company of Skinnamarink. Photo by Maria Baranova.

BOTTOM LINE: Singularly styled from the bananas-brains of Little Lord, Skinnamarink explores the anxieties of early education and what we do to students who are “wrong.”

Skinnamarink is not for everyone; the wild, stylized nature of Little Lord’s work is distinctive and maybe profound. It’s a well-done version of whatever it is—I think—and best not taken too seriously. The massive smears of peanut butter across the faces of the company early on should be your indication. An allergy warning is necessary as the air quickly becomes perfumed with the distinctive scent of Jiffy, evocative of every elementary school cafeteria across this great nation.

Little Lord does not have a set process for devising their work, led by Artistic Director Michael Levinton. Instead they modify strange corners of historical text into performances that are one-part ballet, one-part play, and a heaping portion of crazy. Here, the source material is “McGuffey’s Eclectic Readers,” a nineteenth century series of books that taught elementary school students to read. These lessons include things like sing-songy guidelines to teach the pronunciation of words ending in silent “e’s” (mad vs. made) that are here delivered with the shear terror of memorization that can best be described as “I have to pee.”

Karen Boyer’s costumes are fittingly formal, the boys with pleated slacks and girls with skirts and knit vests. Don’t worry, it’s about to get weirder: the company members all wear Party City blond wigs and tape up their noses in what can best be described as “Seuss-like.” Why? Not sure. But is it funny? Yep. There are small nods of brilliance in Marika Kent’s exposed set design. All props are unapologetically laid out, visible. The floor mimics the lines used to train students to learn the now-archaic thing known as cursive (Google it, Gen Z-ers.)

After a while spent with these lessons, it isn’t entirely clear what they’re meant to be teaching, but it does seem like these students are constantly wrong. The precision of Whitney G-Bowley’s choreography in distant rows and columns seems to punish the performers further; a chalk outline of a human as if at a murder scene must be reckoned with—perhaps a previously punished dunce? Or is this just another device to educate our young minds using the severity of the nineteenth century?

As I write, the stories of privileged, rich, famous people bribing their children into top schools is running rampant on my timeline. Many of these fraudulent students arrive to Instagram their way through Princeton as if going to higher-ed on mommy and daddy’s dime is the latest unicorn craze. What a different world lies in the “McGuffey’s Eclectic Readers.”

Even if the peanuttiness of Skinnamarink isn’t quite your taste, it will likely leave you feelin’ some kind of way about the evolution of education in the States. From the world that Little Lord presents, it’s a tough, peanut-butter-smeared upbringing where few belong and those that don’t must wear the dunce cap in shame. Alternately, maybe we could use more of what works from the “McGuffey’s Eclectic Readers” for Felicity Huffman’s kid.