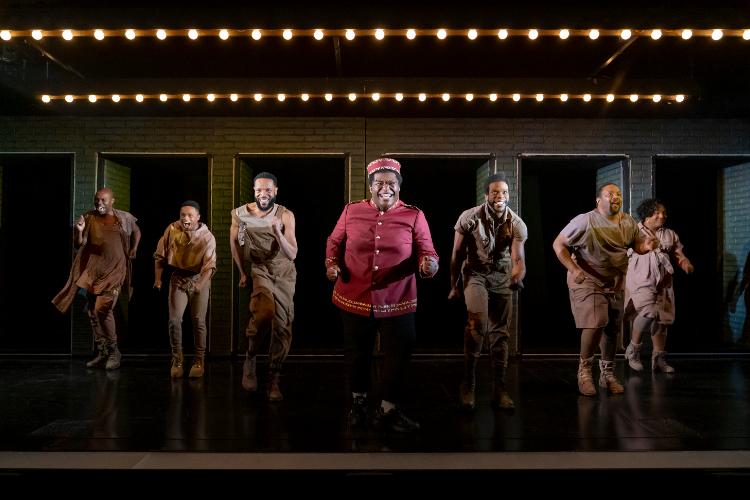 The increasingly popular term “intersectionality” signals the overlapping of two or more social categories—like race and gender, or class and sexuality. And while A Strange Loop could be classified as an intersectional musical (especially as it portrays the intersection of not just two, but all four of these), it brilliantly transcends any attempts at classification. Larry Owens (in a star-making role) plays Usher, a self-proclaimed “young overweight-to-obese homosexual and/or gay and/or queer, cisgender male, able-bodied university-and-graduate-school educated, musical theater writing, Disney ushering, broke-ass middle-class far left-leaning black-identified and classified American descendant of slaves full of self-conscious femme energy.” The utterly delightful and self-aware Usher promises a show of black, white, uptown, downtown, code switching, “and butt-fucking! There will be butt-fucking!” (It’s no spoiler to confirm that Usher indeed delivers on all of his promises with aplomb.)

Accompanying Usher on the strange loop of his journey are physical manifestations of the mental antagonizers that chip away at his sanity. This horrifying yet harmonious Greek Chorus rotates through Self-Loathing, Sexual Ambivalence, black ancestors, his loving but religiously conservative parents, and many, many others. Imposter syndrome, inadequacy complexes, homophobia, and dark racial stereotypes abound over a wide spectrum of theatrical styles including parody and satire. The dialogue is rife with eloquence and wit, anchored by infectious music, all created by writer, composer and lyricist Michael R. Jordan. There are several songs after which, at least at the performance I attended, audience members stood up and cheered wildly, like at a full-blown concert. But when the applause softens and the snapping ceases, there are times when the musical exposes moments of true vulnerability, and it is here where the production shines the brightest.

The boisterous life of a large, queer, black, and unsuccessful musical theatre writer is side-splittingly funny, until it isn’t. Not even a little bit. Usher’s pain and fear of being a disappointment to himself, his community, and his family becomes palpable, as does his blistering indictment against his beloved but homophobic family members. Jackson has created an uncompromising and radical production that feels like an artistic call-to-arms. Guided by the skillful direction of Stephen Brackett, Jackson leads the charge by taking notes from one of his own characters, an elder who advises that “if you’re not scared to write the truth then it’s probably not worth writing.” A Strange Loop is unflinchingly brave in its portrayal of both the agony and the ecstasy of being big, black, anxious, queer and much, much more—all told with humor, tenderness, sadness, joy, and undeniable brilliance.