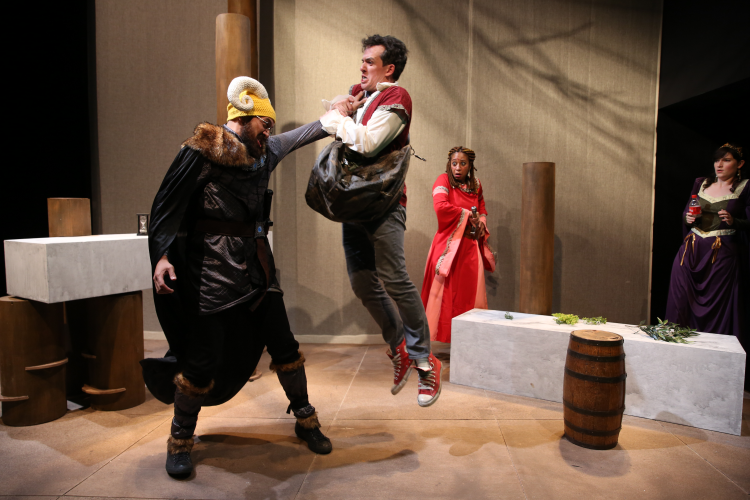 I'll be honest, everything I know about King Arthur I learned from the 1963 Disney movie The Sword and the Stone and the musical Camelot. In Round Table, the character Zach tells us off the bat that this isn't the Disney version. Fortunately, it doesn't really matter which King Arthur you know, as you don't need to be well-versed in his mythology to follow this play. It's not so much about the folklore but the way people relate to it and why.

As we learn at he beginning, Zach (Craig Wesley Divino) is dying. He is a medieval scholar who makes a living consulting for television shows and video games—specifically Round Table, the most popular show on TV (think a Game of Thrones-like following). He also participates in LARP (Live Action Role Playing) as King Arthur, in scenarios that often mirror the action in Round Table. It makes sense that he is so drawn to LARP because that's the one place you get to script your own death.

Scenes go back and forth between the present day, the TV show, and the role play. If this sounds difficult to follow, it's never confusing, thanks to director Geordie Broadwater's smooth transitions, a set (designed by Izmir Ickbal) that is simple and versatile enough to subtly change, and a cast that differentiates between their characters in each scenario.

To add an extra layer, this play is also a romance, starting with the first date between Zach and Laura (playwright Liba Vaynberg), a romance novel ghost writer who wants to write the Great American Novel. Vaynberg's dialogue is funny and engaging, and she is a writer I want to hear more from. She is also a likable presence onstage and her character's yearning for romance is relatable. The scenes between Laura and Zach, and between Zach and his brother Kay (Karl Gregory, who has the funniest line delivery and the most touching moments), are the most interesting in the play.

In contrast, what we see of the TV show actually seems kind of boring; it's hard to tell why it's so wildly successful. Then again, we have to picture a much bigger budget than a small Off Broadway theater can portray. Full disclosure—I've never seen Game of Thrones, so I probably wouldn't be the target audience for Round Table. Though at one point Laura asks Zach what Andrew Scott is like in real life, so if he's on the show, that could be a reason for its success.

Sharina Martin plays Morgan, a character on the TV show, as well as Lena, a bartender who is also one of the most dedicated LARPers. It's refreshing to see a WOC play a character like this, since people generally picture white boys when thinking of nerds. And hopefully this diverse casting will continue in future productions: as the script indicates, "The cast can and should reflect the wonderful diversity of the nerd community."

For fans of romance and fantasy, Round Table is well worth checking out. If you're under 30, the Tuesday, October 8 performance is a 30 & Under night, which includes getting to learn some of the sword fight choreography after the show (I mention this because it's exciting to see the ways theaters engage young audiences).