By Charles Mee, Erin B Mee, Jonathan Matthews, and Ezra Brain
Produced by This Is Not A Theatre Company 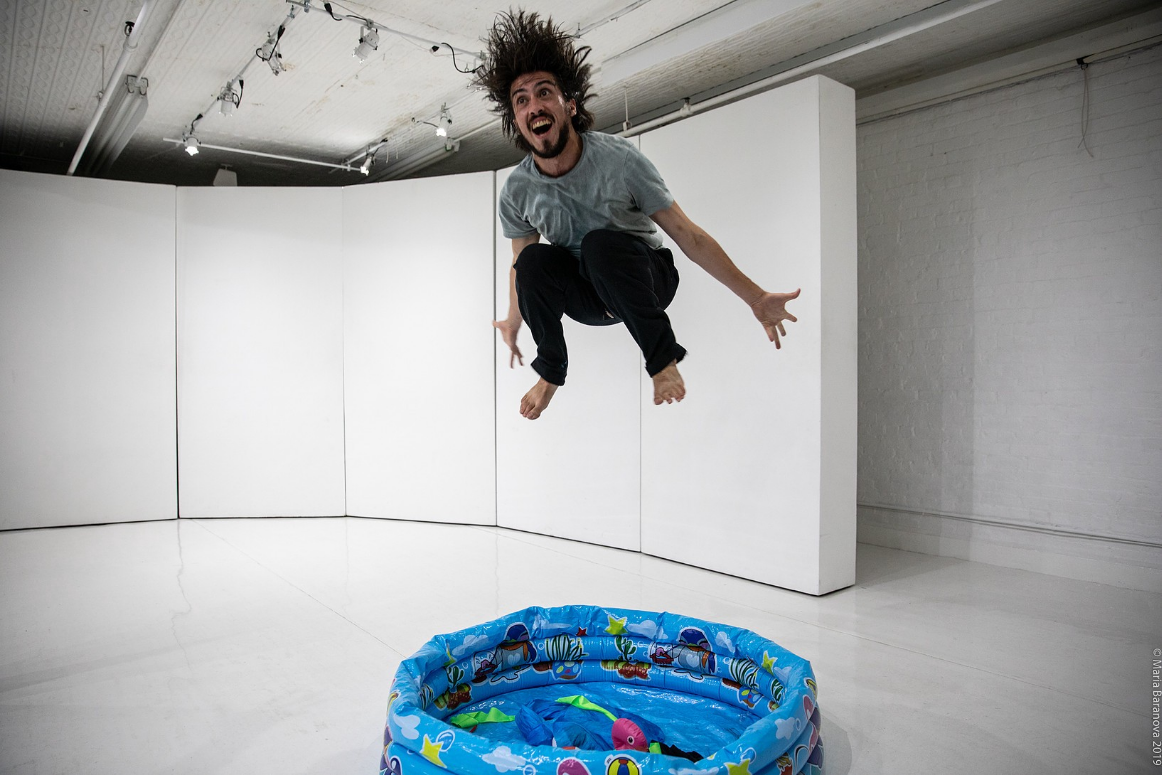 Jonathan Matthews in Play! Photo courtesy of This Is Not a Theatre Company

BOTTOM LINE: A new experimental piece by This Is Not A Theatre Company reflects on the importance of play in everyday adult life.

This Is Not A Theatre Company, under the artistic direction of Erin Mee, is known for bringing its audiences to unconventional venues—they have staged work in a pool, a cafe, and a gym. So the choice of the more conventional Theaterlab for their new show Play! might seem...strange. But even confined to this new circumstance, This Is Not A Theatre Company continues to tease the traditional understanding of the concept of “theatre.”

There are some familiar elements—the “white box” theater, and a few rows of chairs along two walls.  And there's performer Jonathan Matthews, who executes elaborate choreography while delivering an absurdist monologue for the first thirty-five minutes. His athleticism and charisma, witnessed up close in this intimate venue, are irresistible. The special magic—of watching someone unapologetically enjoy the performance process—reminds me of those kids' games that only make sense to them. But in Play!, the sense of joy and freedom that comes from playing is put to the service of building a better society.

“A body is a microcosm of society. Movement is a metaphor” Matthews proclaims while fishing objects like silk ribbons and fans out of a small inflatable pool (the only element of set design). To illustrate what exactly “a just society should” do, Matthews recruits a volunteer and demonstrates the virtues of an ideal society through the metaphors of movement. Gradually, more people are pulled out of their seats until every single audience member is on their feet tossing beach balls to each other to Kool & The Gang’s “Celebration,” some Russian folk music, and other cheerful tracks.

I was initially taken by the transition from passive observer to playmate. It starts with a game where everybody needs to maintain a triangle with two other people—without telling them who they are—in a constantly moving crowd. But once left to freestyle play and dance, the awkwardness inherent in much audience participation sets in. Blowing bubbles is fun, as is playing volleyball. There are other props too—perhaps a fan with a silky tail if you feel like trying out some dance moves. But in doing all of these activities, I felt reliant on props to keep me occupied in a stressful situation, like drinking or snacking at a party where you don’t know anybody.

Play! relies on its audience for the finale, which probably works on some evenings—when the chemical reaction sparks the eruption of joy and everybody dances around like it’s Burning Man. It didn’t quite do it for me. The interaction  is definitely conceptually motivated: after listening to the definition of “play,” it seems logical to experience the concept by practicing it. But in reality, it is all a bit sudden, even forced. Or maybe I simply forgot how to play? Perhaps we all should adopt Matthews’ advice: develop the habit of playing for ten minutes every day.

(Play! plays at Theaterlab, 357 West 36th Street, through September 29, 2019. The running time is 45 minutes with no intermission. Performances are Thursdays through Saturdays at 7; Sundays at 5. Tickets are $25 ($20 for students with valid student ID). Discounted tickets are available for those who see both Play! and Theatre in the Dark: Carpe Diem on the same night. For tickets and more information visit thisisnotatheatrecompany.com.)

Play! is by Charles Mee, Erin B Mee, Jonathan Matthews, and Ezra Brain.

The cast is Jonathan Matthews and the audience.