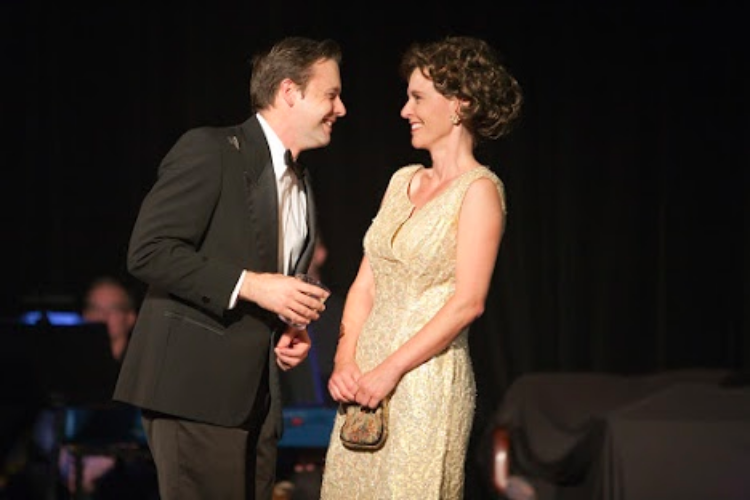 You knew all about the legendary efforts to save the Kansas City Philharmonic from financial ruin in the 1953-1954 season, right? Of course you didn’t. And even after seeing the New York Musical Festival's Overture, which purports to tell that story and provides the occasional tastes of musicality and thoughtfulness, I still don’t.

It’s not really clear why the Kansas City Philharmonic’s having such a hard time. Every time the behind-the-scenes business conversations crop up, book writers Krista Eyler and Barbara Nichols (who also directs) veer off towards the by-the-book romance between assistant conductor Christopher Peters (Joel Morrison) and music-loving Philharmonic telemarketer Lily Brooks (Eyler, doing quadruple duty—she’s also written the music and lyrics). Lily’s gradually losing her hearing—we know this because sometimes she grabs her head in agony while red lights flash and a metallic sound rattles—and she’s afraid that Christopher won’t love her if he finds out that she won’t be able to listen to the music for long.

Oh, but back to the orchestra. Supposedly no one’s gotten their paychecks in a long time, but they seem to adopt an “Aw, gee, shucks” attitude about that oversight. It’s like The Pajama Game but with lower stakes.

Luckily, Eyler is an able, clear performer, who brings a rich maturity to her songs, especially, “Another Hat,” a Sondheim-ish piece in which Lily recalls her first concert hall experience. Eyler’s more poetic lyrics pulsate alliteratively, like when Lily picks up the Philharmonic conductor’s baton: “My palm protects and warms the wood.” But as much as characters extol the virtues of orchestral music, there’s seldom a song that suggests symphonic heights, especially given the pale piano-bass-drums orchestrations. And when Eyler aims for '50s pop pastiche, the tunes fall flat.

Most of Eyler’s castmates, almost all from the Kansas City theatre community, lack her spark, but Kay Noonan brings some raunchy humor as an orchestra staff member Inda May Beasley (who was a real person, unlike Lily and Christopher).

What potential Overture hints at in its first hour hasn’t been realized in the lackluster second act. The bottom half of the show suddenly switches focus to a pair of wealthy donors (Erica Baurth and Stasha Case) who apparently raise the requisite funds by doing, well, fairly basic fundraising things like throwing a luncheon and selling an orchestra-themed cookbook. Eyler lets the air out of her score by turning the focus away from the show's greatest asset: her own compelling performance.

The Kansas City Philharmonic kept its tune alive for another few decades, finally shutting down for good in 1982. Unless Eyler and Nichols can streamline their storytelling, this may be Overture’s grand finale.