Oscar at The Crown

Created By Mark Mauriello; Directed by Shira Milikowsky
Produced by The Neon Coven 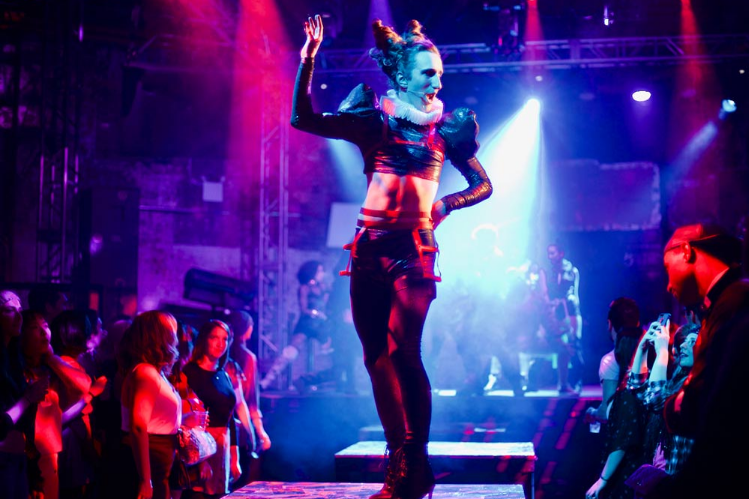 A scene from Oscar at the Crown. Photo by Ted Alcorn.

BOTTOM LINE: Oscar at The Crown is an immersive nightclub musical, best experienced with a large group of friends who like to dance.

Oscar at The Crown calls itself an immersive nightclub musical. The emphasis is more on immersive and nightclub than musical. If you're looking for a dance party or an excuse to dress up and wear glitter, this is the show for you. It's best experienced with a large group of friends, after you've all had a drink or three.

The show takes place on moving platforms all around you, and you can be as involved as you like. Some audience members choose to dance along in the center of all it and cheer and respond. You also have the option to stand along the sidelines.

The concept is that we're in a secret bunker sometime in the future, but it's difficult to follow the plot. Not because of the complexity, but because it's hard to make out the lyrics of Andrew Barret Cox's songs (Shannon Slaton is credited with sound design). The idea is that these outcasts-in-hiding are putting on a show about Oscar Wilde (played by Mark Mauriello, who also created Oscar at The Crown). A young woman (Kerri George) finds her way inside, trying to escape whatever is happening outside the bunker (although never specified, it's obviously bad), and they invite her to play Constance, Oscar Wilde's wife. The show-within-a-show is about the connection between Oscar Wilde, reality television, and Julie Cooper, a character in The O.C.

It's fun at first, but becomes repetitive in the short 90-minute run time. There isn't much variation in Cox's choreography. Things take a turn when Constance starts talking back to Oscar, saying that she had accomplishments of her own that aren't remembered. It's one of the moments that hints that the show could be going for something profound, but in the end, you don't walk away with too many insights.

This is the rare show that encourages you to leave your phone on and document it on social media, so at the very least, you may leave with some enviable Instagram content. The many talented singers and dancers in the cast work hard to keep everyone having a good time, and there are also plenty of fun costumes (concepts by Mateus Forte) to admire—both onstage and in the audience.

(Oscar at The Crown plays at 3 Dollar Bill, 260 Meserole Street, in Brooklyn. Tickets are currently on sale through 9/28. The running time is 90 minutes with no intermission. Performances are periodic Thursdays, Fridays, Saturdays, and Sundays at 8; schedule varies, so check the website for the most up-to-date information. Tickets are $35; $59 for "WILDE" (VIP) status. For tickets and more information visit oscaratthecrown.com.)