Suggested donations ($23 and up) 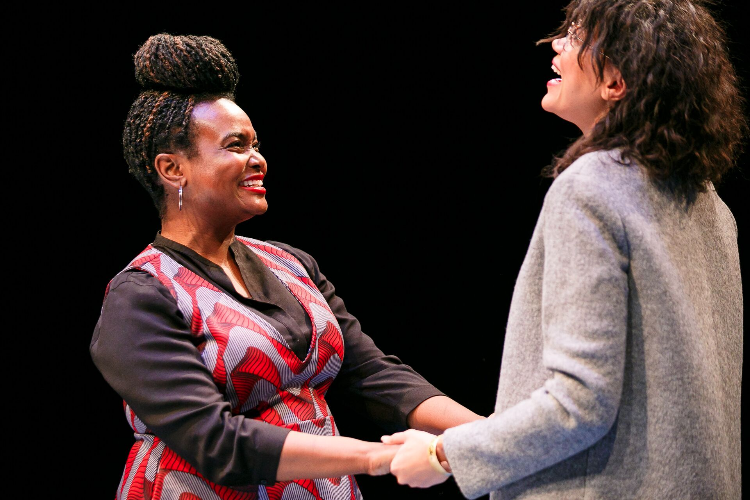 BOTTOM LINE: Quantum computing may hold the key to moving beyond the limited, binary world many of us inhabit.

What if we could go back over our lives in a non-linear, non-commutative fashion? In Operating Systems, alternative mathematics using complex algebraic expressions blend with the narrative of a young, transgender narrator who goes backward and forward in time to review their actions. Dani (Neo Cihi), who is trans-masc,  is often seen wearing a denim jacket with patches representing science-fiction and superhero trends like Spider-Man, Doctor Who, and Star Trek. Dani was once a student at Code Breakers, a non-profit that teaches coding to girls of color. Code Breakers is the brainchild of Stephen Goode (John Lenartz), an aging white guy whose positive contributions to society are about to be celebrated in a piece of journalism by Jake (Isaiah Tanenbaum).

Amid all of this retrospection, acting CEO Benita (Lori Elizabeth Parquet) is about to welcome back former Code Breakers student and Silicon Valley hotshot Bel (Morgan McGuire) to a new position planning the curriculum. Bel is excited to bring Quantum Computing into the long-term plan for Code Breakers; its component “qubits” allow for more possibilities than the more familiar “binary” computing.

But the "five-fold symmetry" of these characters is going to be disrupted. As the action unfolds on the intriguing set (designed by Lauren Girouard) that is bordered by a glowing hexagon, keep your ears open for numbers. From references to "octonions" (a hyper-complex number system that operates in eight dimensions, wherein 3 + 2 does not equal 2 + 3) to the plural nature of "they/them" pronouns, there is much commentary on contemporary workplace gender inequality and the #MeToo movement.

Bel is excited to speak with Stephen about her ideas for the curriculum, so Dani reserves a booth at a wine bar called The Bacchae. (Greek theater fans may wonder if a prominent man is about to be torn apart by women.) At the end of the evening, when it's just the two of them, Stephen crosses a line with Bel. And when his subsequent apology isn't enough, Bel tries to enlist Jake to find evidence of other sexual harassment, in the hopes of preventing him from hurting other women. But Benita is against such tactics, believing that any allegations against Stephen will only truly hurt the Code Breakers, and by extension, the minority women it benefits.

Can Bel fragment and compartmentalize her life to keep doing the work she loves? What secrets do Dani and Benita share? Perhaps Dani's views on gender are what corporations need to adapt to an exciting future: "Yeah, because there’s the hardware you just have, and you’re kind of stuck with that, but then there’s the OS and programming language, and those you can control. You can fix. And then you can run whatever apps you want on it, once you get that right."

With Operating Systems, Flux's Founding Creative Partner Gus Schulenburg, a trans playwright, brings many powerful voices into her latest work. Director Emily Hartford coaxes some fabulous performances from the ensemble, examining a compromised work environment from many angles. I felt sympathy for all of the points of view presented in this play, even for Stephen, until I realized he was unrepentant. Indeed, the consequences of our actions can be seen as a plethora of possible worlds, which we can harness through honest observation and dialogue. Jason Tseng's costumes nicely capture the outsider culture that Code Breakers represents. And Kia Rogers's lighting helps us keep our time streams where they need to be. Flux Theatre Ensemble continues to present intriguing plays about the future of human nature. Hopefully, this intelligent play will make you want to broaden your math horizons.

(Operating Systems plays at Abrons Arts Center, 466 Grand Street, through March 16, 2019. The running time is 1 hour 35 minutes with no intermission. Performances are Wednesdays through Saturdays at 7:30; and Sunday 3/10 at 2:30. Tickets are "free," with donations strongly encouraged. For more on Flux Theatre's Living Tickets program, visit fluxtheatre.org. You can find more information, and a link to tickets, at fluxtheatre.org.)