Written and Performed by Radiohole

Off Off Broadway, Experimental Theatre
Runs through 11.16.19
The Collapsable Hole, 155 Bank Street 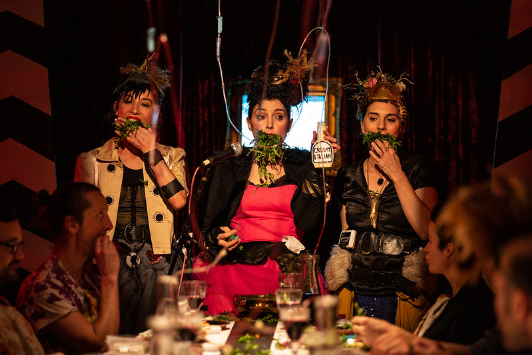 Considered a hallmark of civilization, the event of a shared meal is inherently ritualistic, bound in layers of social context and self-imposed etiquette. Yet closer scrutiny of dining practices reveals the primal acts of consumption, violence, and temporality they so artfully conceal. Known for its irreverent, multi-sensory productions, performance art ensemble Radiohole gleefully dismantles these constructs in Now Serving, a deconstruction of dining culture and the conventions on which it rests.

Styled as an interactive dinner party, Now Serving begins in The Collapsable Hole’s small lobby, in which cocktails, mood lighting, and piped-in jazz invoke a swanky lounge area. Audience members receive numbered tokens and are ushered into the playing space through voice-over announcements and the turning of a deli-style “now serving” counter over the theatre doors. Based on our purchased ticket tiers, ten audience members join Radiohole’s ensemble (Amanda Bender, Erin Douglass, and Maggie Hoffman) onstage for a four-course meal, while remaining participants are seated gallery-style and served popcorn, candy, and beer. With its cardboard-cutout sets and props, TV monitors looping food-related clips, and performers’ shredded taffeta cocktail dresses, the piece’s aesthetics form a funhouse parody of vintage fine-dining conventions. Accompanying the action on the electric violin, instrumentalist Catherine McRae offers ambient dinner music, while the ensemble’s lone male (Eric Dyer) presides over the gathering in a papier-mâché frog mask, a silent, buffoonish emblem of the patriarchy.

As dinner progresses, Radiohole uses each course to disrupt common social mores and dining practices, unearthing their darker implications and infusing them with fresh meaning. Painted with red wine, squished into balls, and equated with biological “yeast,” mass-produced white bread acquires newfound “Wonder” as a symbol of femininity, transformation, and nourishment. Tableside conversation simmers with disquiet as performers address public self-consciousness, stifled disgust and desire, and the default habit of over-apologizing. Death references loom over the celebration: our hostesses offer grim toasts with wine poured from IV bags, while discarded plates, swept to the floor by a tabletop conveyor belt, pile up in a messy memento mori. Manners receive a joyful thrashing as company members throw salad against an electric fan, chug dressing straight from the bottle, and recite dialogue through mouthfuls of greens.

The piece reaches a carnal, and carnivalesque, peak in its “main course,” the ritual slaughter of Dyer’s frog-man and the systems he represents. Plying him with a cardboard jug of liquor, the women remove Dyer’s frog mask, eat cake out of his disembodied head, and, with help from fellow diners, pummel his “corpse” with Wheaties and ripe tomatoes. (Onstage and front-row viewers, be warned; you’ll want to accept the goggles and tarps they offer). As guests blithely eat meatloaf and the company extols the power of poisoning as an effective means of removing toxic men, the carcass remains on the table, depicting the sacrifice behind every meal and act of revolution. Likewise, Dyer’s eventual revival, and recount of the visions from his limbo state, evokes countless archetypes of death, rebirth, and transcendence.

Pastry chef Kristin Worrall concludes the show with a custom-designed dessert, invoking the sweeter sides of existence and guiding us to recognize and create them in the wake of destruction. Just as the word “dessert” stems from the French desservir—to remove that which has been served—Worrall invites guests to clear away the show’s prior chaos and their own mental constrictions to experience a pure relationship with the food before them. She then walks us through each element of the confection—life-evoking eggs and cream, aphrodisiac chocolate and dragonfruit, a humble dried strawberry—and in doing so, turns the experience into a celebration of life, a tiny glimpse of a world in which we share and honor all aspects of our complex humanity. The meal’s final moments, in which company members sing, smoke cardboard cigarettes, and strew the table with fennel seeds and black flowers, offers a similarly cheeky nod to mortality.

While Radiohole’s brand of in-your-face performance art is clearly an acquired taste, for fans of the avant-garde, Now Serving offers entertaining and substantial fare. Disturbing and cathartic in all the right ways, the piece pairs playful disregard for old systems with respect for the deeper principles they obscure. As life, culture, and our efforts to sustain them are ultimately fragile, Now Serving invites us to take such things a bit less seriously.

(Now Serving plays at The Collapsable Hole, 155 Bank Street, through November 16, 2019. The running time is 60 minutes, no intermission. Performances are Fridays and Saturdays at 8. Tickets are $25 for gallery seating (with cocktails and snacks); $50 for table seating (with four-course meal) and are available at radiohole.com.)