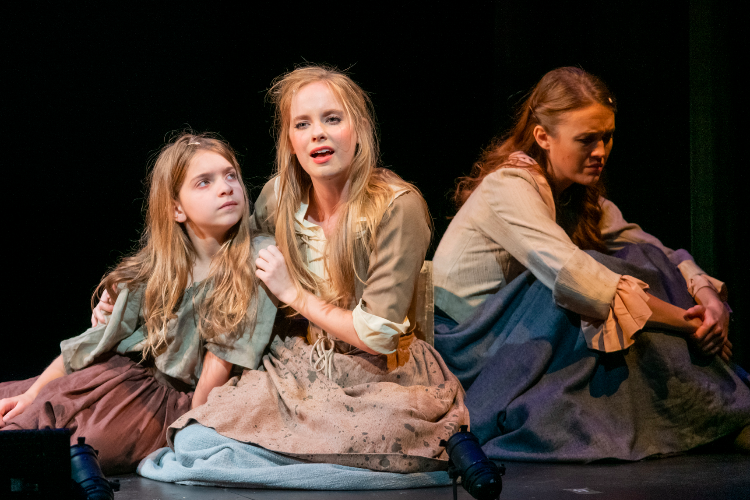 BOTTOM LINE: It's rough sailing for Ladyship at the New York Musical Festival.

Straight out of the Les Miz playbook, Ladyship opens with Irish sisters Alice (Maddie Shea Baldwin) and Mary (Caitlin Cohn) sentenced to seven years hard labor for stealing a handkerchief. Before you can say 24601, they’re packed in a ship bound for Australia where they’ll be put to work: that is, if they can survive the year at sea.

For the rest of their journey (and the show), the sisters and a small gang of similarly persecuted women must put up with a host of 18th-century horrors: inedible food, deadly storms, predatory sailors. But watching characters put up with unpleasantness isn’t particularly exciting or engaging, at least not in this largely static staging.

Though Alice keeps promising to do something to improve the situation, she ultimately only makes a plan to make a plan once they see what it’s like in Australia. And despite the women’s feminist platitudes (“Stronger together!” and “I will not be broken like a china cup!,” they keep declaring), it’s more often the men aboard, like Mary’s ill-fated love interest Finn (Jordon Bolden) and the meekly sympathetic Captain Adams (Quentin Oliver Lee), who keep coming to the convicts’ rescue.

Luckily, there’s Maddie Shea Baldwin coming to the musical’s rescue as destitute, underdeveloped Alice. Baldwin’s fierce performance endows the score, by sisters Laura and Linda Good, with variety, her steely vibrato conveying depths that the oft-clunky lyrics do not (“Father would drink/I’d clean up his stink,” Alice overshares). Baldwin deserves a hardier vessel for her talents, but she still gets a chance to let it rip in the anthemic ballad “I’ll Find A Way.” That song’s the best in the Good sisters’ score, which is otherwise vaguely reminiscent of Les Miz with a hint of sea chanty mixed in.

Ladyship has a generally robustly voiced ensemble, with particularly notable singing from Brandi Knox as Mrs. Pickering and Noelle Hogan as Kitty, an 11-year-old falsely accused of doll theft. But nice voices are no substitute for nuanced characters who change or effect change as their stories develop. Ladyship will need to pick up some of that precious cargo before the next port.