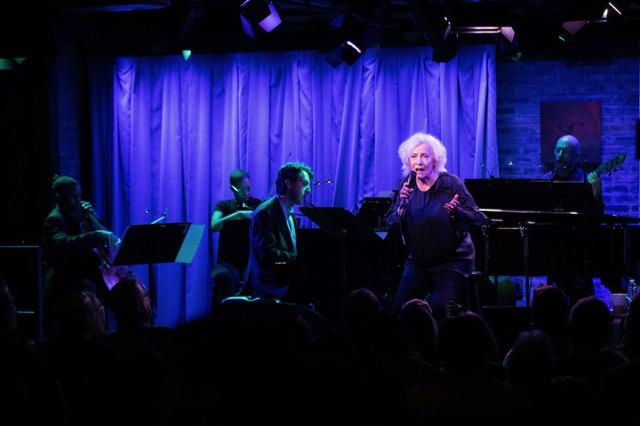 Jason Robert Brown may not be a household name, but he has composed the scores for Broadway shows such as The Bridges of Madison County (for which he won Tonys for both his score and orchestrations) and Parade (another Tony-winning score), not to mention cult favorites like The Last Five Years and Songs for a New World. Younger listeners may be more familiar with his pop song “Invisible,” which he wrote for Josie, a girl he met a few years ago when she was receiving treatment at the Ronald McDonald House.

Dubbed “the Voice Of Broadway,” Betty Buckley has been tearing up the boards even before she won the Tony for Cats. When not appearing on stage and racking up awards and nominations in shows such as Triumph of Love, Sunset Boulevard, and Promises Promises, Buckley has shared her vocals on 16 solo albums.

The two, backed by a quintet of string musicians, sang songs by both Brown himself as well as other composers, opening with the duet “Hope.” Then the breezy duo took turns: Buckley sang “What I Meant To Say,” “A Song About Your Gun” (one of my favorites), and “You've Got to Be Carefully Taught,” while Brown did double duty, playing the piano and singing “Wondering" and “The Old Red Hills of Home.”

In introducing their next duet, the fan favorite "Stars And The Moon" from Brown's own Songs for a New World, Brown and Buckley talked about how they met in 1992, at a concert for Stephen Sondheim. “This song is sort of the whole history of my relationship with Betty,” Brown remarked. Buckley, showing what a consummate performer she is, gave a little more gossip. “Someone got sick and I was called in. I was the only diva without a beaded gown. I had one rehearsal with the Harlem Boys Choir and was backstage praying I would just end the song with the orchestra!” But my favorite song of the evening was when Buckley soloed on the up-tempo "The Schmuel Song," from The Last Five Years. It gave her the opportunity to be at her most expressive, with lots of shrugs and pantomiming of sewing. She mock wiped her brow, deservedly so, at the end.

It was a rare treat to spend the night with Betty Buckley, a woman I must admit I know more from her television and film work, where she rarely sings. And it was especially interesting to see Brown and Buckley share the stage, after learning how much they have orbited each other over the years. Time will tell when Buckley will be back, but you can catch Brown again on December 14th (and hopefully more in 2020) in his residency at SubCulture, where he performs with a new guest each month.