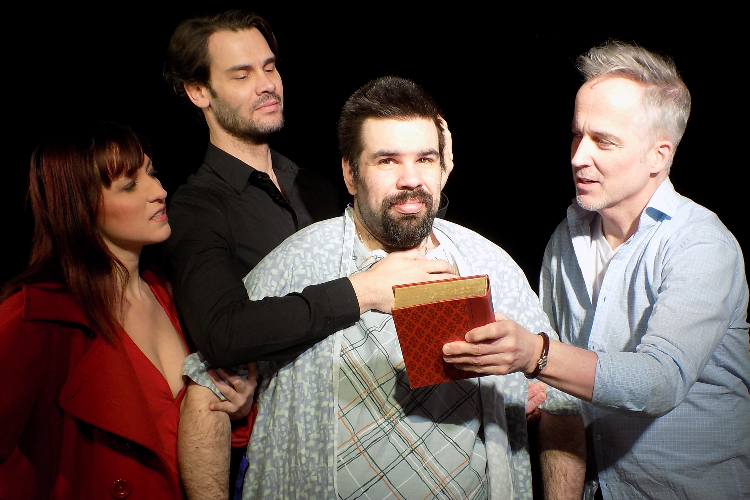 BOTTOM LINE: Mike wakes up in a hospital bed after trying to forget his identity. Will he slowly remember and balance the various parts of his life, including his Catholicism, homosexuality, cerebral palsy, and love of theater?

Mike (playwright Nicholas Linnehan) is a man who has many identities. He was raised Catholic, tried to be an athlete to please his father (and other handsome men), later realized he was gay, and still later returned to being a practicing Catholic. And he also has cerebral palsy—at age 3, Mike could not walk or talk. This last identity is definitely important—it prompted not only the writing of this play, but also the founding of Linnehan's theater company. Yet Linnehan also makes sure to begin by telling us that he is different. Perhaps that is the point; one cannot necessarily tell that a person has cerebral palsy, and one shouldn't assume that someone with CP will not be able to walk or recite his lines. This is an inclusive theater company; as tactfully posted on the company website, “Why can’t we all PLAY together?”

Identity opens with Mike personably telling the audience that he is retelling his life story. He then climbs into a hospital bed, arms restrained, where he wakes up screaming. A concerned Doctor (Matthew Tyler) tends to Mike, but says he can’t tell him any information about his past. Indeed, Mike signed an agreement asking for this to be done. Mike the narrator then takes turns in and out of the hospital bed introducing us to people from his past. We meet Mike's father (Tim Connell), who spent some time in jail and was brutally molested by a guard. These experiences help explain his future Bible-thumping hatred of gays. Mike's mother (Amy Liszka) is his hero, the one who encouraged him to keep doing school plays when the baseball team rejected him. For a young man with cerebral palsy, Mike tried very hard to fit in, yet able-bodied people could not see him for what he was.

After his parents' divorce, Mike comes home from college to visit. Away from home, Mike acknowledged his true feelings for his boyhood friend, Jack. Through this new sense of love, Mike can now appreciate the "true" teachings of Catholicism, whether or not the people in the church accept him. As a case in point, his father slaps him across the face with a Bible, but Mike turns the other cheek. Later, Mike's mother goes to a Priest (Ben Dworken), who will not listen to her confession until she goes home and makes her marriage work.

With so many conflicting identities, Mike goes to see a therapist. He has a Dreamgirls moment, singing "Look at me. I am changing." Slowly we journey full circle to the beginning of the show. It is not easy for most of us to come to terms with our contradictory wants and needs. Perhaps this is better illustrated by Mike and the cast dancing to "Crucify" by Tori Amos, which is certainly the first sincere performance of the song by a devout Catholic that I have ever witnessed. This production, previously staged by advocates for inclusive theater including Nicu's Spoon, is an enlightening chance to hear one man with CP speaking his truth. Director/Sound Designer Christopher Scott brings much laughter and music to this play. Bravo to all who helped construct the narrative within the narrative wherein it feels safe to be real.

(Identity plays at El Barrio Artspace PS 109 Underground Theater, 215 East 99th Street, through March 24, 2019. The running time is 1 hour 40 minutes with no intermission. Performances are Fridays and Saturdays at 8; and Sundays at 3 and 7. Tickets are $15. For more information and to purchase tickets visit identitytheater.com.)