Off Broadway, Play
Runs through 3.31.19
WP Theater at the McGinn/Cazale Theatre, 2162 Broadway 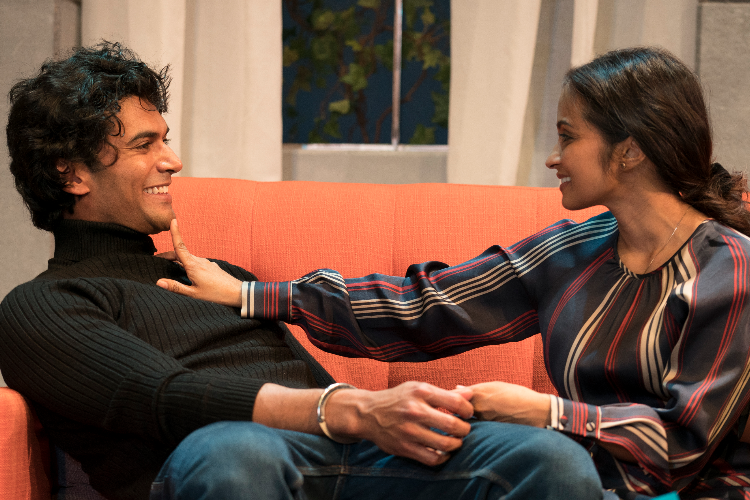 BOTTOM LINE: There's a fine line between sexual attraction and hate, especially when you believe that special someone is spreading anti-Muslim stereotypes.

Imran (Sendhil Ramamurthy) is a successful writer and a lapsed Muslim. His many sensational novels, some short-listed for the Pulitzer Prize, have the power to shape the American public's perception of Muslims. At his home in the Detroit suburbs, Imran hosts a party to promote a fellow writer's book, where he meets Layla (Kavi Ladnier), a literature professor at Wayne State College. Imran's morally ambiguous writing, along with the distance he keeps from the Muslim community, irk Layla, a liberated, ethical person. Right after insulting each other they have passionate sex—the Hatef**k. In the morning, they talk about what it means to be a good person, in keeping with Islamic teachings. And although still attracted to each other, they want to keep this a one-night stand.

Rehana Lew Mirza’s writing certainly kept me engaged in this sharp, witty face-off. As these characters state, staying involved in official Islamic communities can be more stressful than doing good deeds in private. Why? Why is it that two brown people talking at a party are labelled “cliquish” while a group of white people would not be? Is the sacred Qur’an really full of violence, when the Hebrew Bible has much more judgmental, violent rhetoric? What about Islam might make the likes of Imran hate this part of themselves, and what can be done about it?

A few days later, Layla stops by again. Imran knows she has translated the writings of a contemporary Syrian refugee, and offers to persuade his agent to get this socially relevant work published. What does Imran want in return? Just for his books to be added to the syllabus in Layla's class. But as it turns out, this would bring Layla into the dirty business of powerful publishers with wrong-headed ideas about Muslims, some of which come from books like Imran's. It is not easy for a writer like Layla to take her translated, true story to a wider audience that would rather continue to watch stereotypical Muslim terrorists in the movies. In many ways Hatef**k is all about power—who holds it (men) and what they want (violence).

Adrienne Campbell-Holt directs this non-stop verbal and emotional battle with finesse. Kavi Ladnier and Sendhil Ramamurthy are superb in their constantly guarded love-hating. I am in awe of their efforts in this play, which is such a nuanced look at living in America while Muslim. This is an excellent co-production of Colt Coeur and WP Theater (formerly known as The Women's Project). Anshuman Bhatia's modern set is elegant and immaculate, quite the best place to hide away questions about identity. Costumes by Sarita Fellows add both dignified and sexy tones to the production.

(Hatef**K plays at the WP Theater at the McGinn/Cazale Theatre, 2162 Broadway, through March 31, 2019. The running time is 90 minutes, no intermission. Performances are Tuesdays through Thursdays at 7, Fridays at 8, Saturdays at 2 and 8, and Sundays at 3. Tickets are $59 - $89 and are available at wptheater.org. For more informatoin visit coltcoeur.org.)

The cast is Kavi Ladnier and Sendhil Ramamurthy.