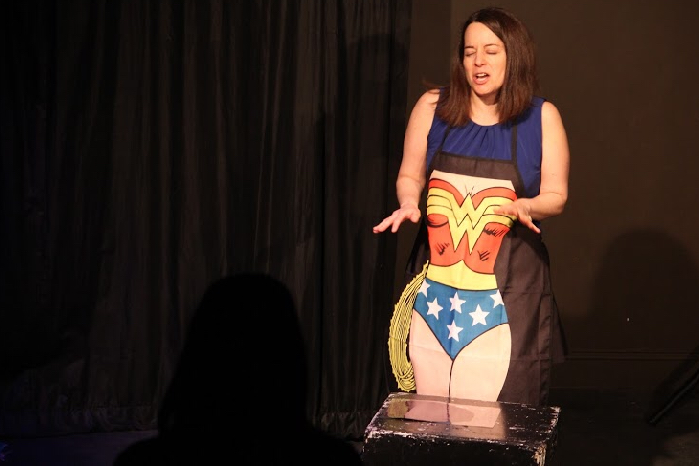 BOTTOM LINE: Hard-Core CORN examines one woman’s tale of cutting out corn, and the funny yet surprising ways living corn-free has challenged her.

Kelly Haramis really, really loves eating corn. And she’s not alone. Americans eat on average 46 pounds of high-fructose corn syrup a year, which Haramis jokes, is like eating a mid-sized dog—a “corn terrier named Maizie.” A few years ago, Haramis’ little girl developed a sensitivity to artificial food coloring. But when the nutritionist tests her blood work too, Haramis is horrified to learn of her own sensitivity—to corn. The ensuing 55-minute show, Hard-Core CORN, is equal parts entertaining and educating. Haramis—petite, pleasing, with a splash of pith—stages a series of sketches around the challenges of avoiding corn.

First and foremost, there’s the food component. She struggles to cut out the obvious culprits, and soon learns that a large number of foods contain corn in some form. Then, there’s everything non-food related that also contains corn—medicine, bath and beauty products, even toilet paper. Figuring all of this out is time-consuming and expensive, not to mention worrisome. Why is corn in everything?

Directed by David Knoell, the piece vacillates between a number of story lines, aided by clever props, costume changes, and outstanding sound design. Haramis is a buoyant storyteller with a gift for creating distinct characters, including versions of her younger self. Yet some of her most effective moments come when she drops out of the sketch performer punchiness and into her own voice. In these small, select moments, Haramis reveals a more honest side of how her life has evolved since cutting out corn. It's just as Haramis jokes about popcorn: the saltiness makes it that much sweeter.

Hard-Core CORN is written and performed by Kelly Haramis. Directed by David Knoell.