By Jesse Eisenberg; Directed by Scott Elliott
Produced by The New Group 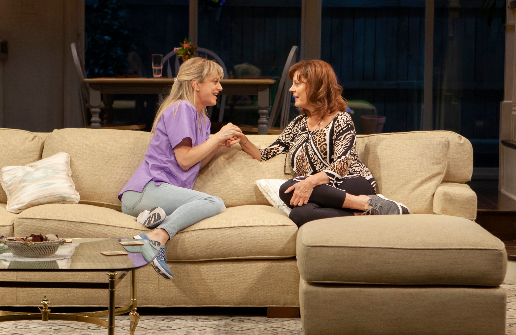 Lorraine is living her dream. She’s starring in South Pacific at her local New Jersey Jewish Community Center, in the supporting role of Bloody Mary. She’s doing what she loves; she’s one of the lucky ones. But Lorraine (Susan Sarandon) returns home from rehearsal to her retired and chronically ill husband, Bill (Daniel Oreskes), her very ill mother, and her mother’s home health aide, a Serbian woman named Ljuba (Marin Ireland).

Lorraine, who is as self-absorbed as any Hollywood actress ever portrayed in media, goes on and on about her rehearsals to anyone who will listen, and even those who won’t. It’s clear she sees herself as a martyr, but we quickly learn she’s much more interested in herself than she is in the problems of anyone else in her household. Lorraine also fancies herself a matchmaker, and decides to set Ljuba up with one of her castmates from South Pacific, Ronny (Nico Santos). He's playing Lieutenant Cable, and his partner has no desire to ever get married.

Ljuba presents a contrast to Lorraine in dozens of ways, but to name a few: she has a job and earns her own money, she cares about her family and wants to bring them over to America, and she cares genuinely about Lorraine’s family. Kindhearted and naïve, Ljuba is not alarmed by any of Lorraine’s self-serving behavior, and listens to all of her ranting and raving. She tells Lorraine, “Someone say something sad or angry and you just pretend like what they say is happy. Is like you don’t even hear them sometimes. Is a gift, in some way.” By contrast, Lorraine tells Ljuba, “This is why I love talking to you. Anything sad in my life is automatically sadder in yours.” Lorraine complains that her husband seems repulsed by her, so Ljuba tells a story about her own husband back in Europe, who slept on the kitchen floor rather than sleeping next to her.

Luckily, Sarandon manages to fill out her portrayal of Lorraine to make her a woman we’d like to at least spend an hour or so with. Ireland is wonderful opposite Sarandon, making all of Ljuba’s actions completely believable, even when the situation is not. It takes an excellent actress to hold her own against Sarandon, and Ireland does. She also manages to take a stereotypical character (of an immigrant home health aide) and bring depth to her.

To be clear, Eisenberg’s script is often hilarious, and full of great one-liners. The writing is witty, and the story is well told. Scott Elliott, a veteran director of Eisenberg’s work, understands exactly how to make the play come alive, and it’s always refreshing to see a play written by a man that focuses on the personal stories of women. But it’s hard to understand why Lorraine is worth caring about. Ljuba is a hardworking immigrant just trying to make a better life for herself, and Lorraine is completely self-absorbed, making even the set-up about herself. (As Ronny and Ljuba take photos to prepare for a meeting with immigration, Lorraine insists on inserting herself into them.) Which brings me to Chekhov’s gun, or in this case, Chekhov’s fifteen thousand dollars. As soon as Ljuba mentions she has fifteen thousand dollars in cash in her box spring...I think we all know how this story will end.

Elliott’s production is well-paced, and excellent supporting performances from Tedra Millan as Lorraine’s teenager daughter Darby, and Oreskes in a thankless role, make this play a truly enjoyable two hours. But on closer examination, it doesn’t add up to much more than, well… talk.