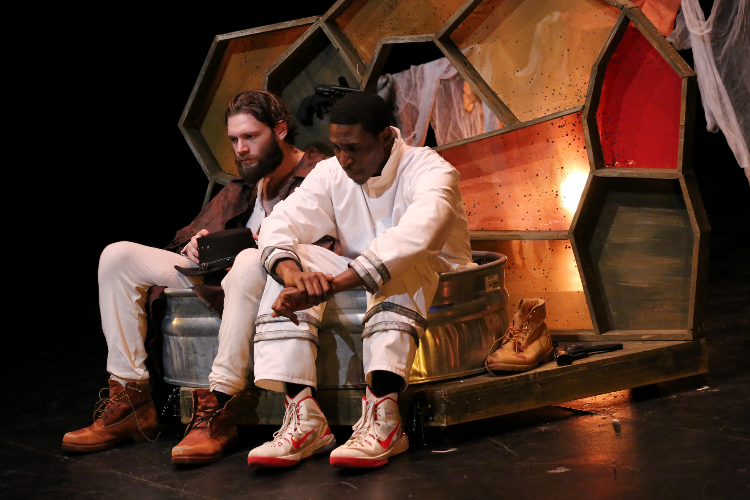 BOTTOM LINE: A Gulf War veteran takes a colorful trip through his memories of heroism and meets a whole bunch of fantastical characters, as well as his ex-wife and late brother.

As many stories, both real and fictional, have made clear, war is not only hell, but surviving it can be too. Many soldiers who come home must deal with Post-Traumatic Stress Disorder. John Patrick Bray 's Friendly’s Fire is the fantastic story of one such soldier, Gulf War veteran Guy Friendly (Matthew Weitz), who is now so out of touch with humanity that he lives on his own in Alaska, with his personal bees. Just as the title alludes to someone hurt by those on his side, Friendly must work hard to fix his own interior damage.

When we meet Guy Friendly, he is a wild man in the process of seducing Jessica (Hannah Taylor). As in fantasies, the woman is more dangerous than she looks. She drugs Friendly, pulls out one of his front teeth for her trophy necklace, and leaves him to swim through turbid nightmares. That's where Daniel Hogan’s fabulous, multi-dimensional rainbow set, Taylor Edelle Stuart’s astral projections, and Janet Bentley's fiercely vibrational sound design help. As Friendly languishes in pain and partial consciousness, Todd (Adeyinka Adebola), the local pawn shop owner who happens to be wearing a space suit, sees his door open. As Todd talks to his friend until help arrives, Friendly's dream state continues, and he and Todd set out on a quest to the North Pole.

What follows includes a gift of glowing honey from the Queen Bee (Ita Korenzecher), some rogue Carpenter Bees (Kyle Porter and Johnny Blaze Leavitt) who try and take this honey, as well as an appearance by Bera (Kyle Porter), a walking, talking, singing polar bear rug. Unfortunately, Bera is shot by a Poacher (also Kyle Porter) who is reminiscent of the mysterious, evil Egg Man (Johnny Blaze Leavitt), a being whose head is a bear trap with sharp teeth. Along with the fantastical elements (which Friendly and Todd realize are from an old He-Man-style cartoon), there are flashbacks to Friendly's marriage and to his dead brother Jason, a soldier who was killed in action. It takes help from Friendly's friends to guide him through the guilt he feels about his brother's death.

Friendly's Fire includes bright colors, honeycomb shapes, and allusions to duty, heroism, and conformity, as well as music (the original songs "Tumbleweed Glacier" and "I Can't Tell What's Real Anymore") and feedback that is all both comforting and intrusively necessary. Indeed, like an intervention waiting to happen, the past does not leave Friendly alone. John Patrick Bray suggests in the liner notes that young boys are raised on superhero stories and subtly coaxed into military service. Anna Hogan's direction helps to make the distinctions between the painful past, the challenging present, and the intermediate states that the drugging has induced. It's a fabulous, open-hearted ride that fans of Terry Gilliam will surely enjoy.

Matthew Weitz brings to the role of Friendly an excellent combination of sturdiness and fragility. Living as a shut-in somewhere in remote Alaska, Friendly has tried his best to keep the past away. Only in his wildest dreams do the ordinary objects of his life confront him. (The connection between a pulled tooth and a symbolic toothbrush made me think of Time Bandits.) Moss Pete (Kyle Porter), a being made out of peat moss, sticks his head out of Friendly's toilet. Not exactly Oscar the Grouch, but is Guy Friendly supposed to be Guy Smiley, the impossibly handsome Muppet? It's a good thing Friendly has an excellent friend in Adeyinka Adebola as Todd. It's even better that Ita Korenzecher's Queen Bee is there to help him confront his failure with women. Friendly and Jessica had once expressed the desire to ask Santa why they didn't get what they wanted (something that happens onstage). We don't have to be combat veterans to know that there is another, less destructive way to live.