By Cole Porter and Herbert Fields; Adapted by Tommy Krasker and Evans Haile;
Directed by Hans Friedrichs
Produced by The York Theatre Company 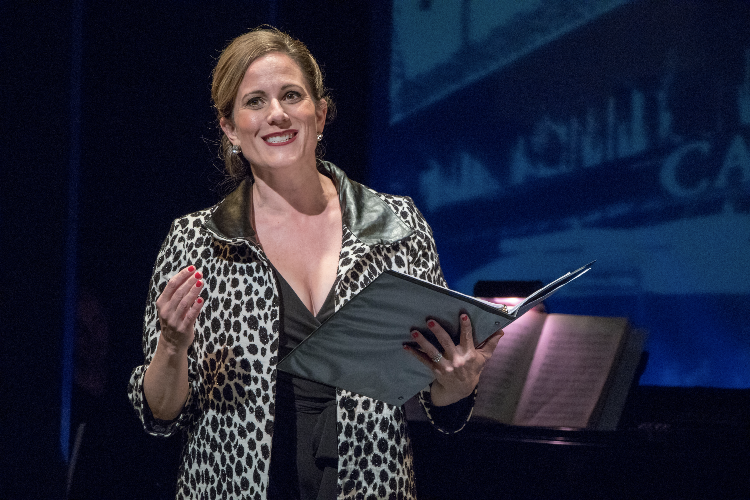 BOTTOM LINE: With a few standout moments and some melodies well worth excavating, Fifty Million Frenchmen is a frilly Cole Porter minor work that's been lightly dusted and deposited at the York.

You know those moments at the theater where you realize one performer’s about to pull away from the rest of the pack? That happens about halfway through the first act of Fifty Million Frenchmen, the goofy Cole Porter musical receiving a concert version in the York Theater’s Musicals in Mufti series. It was somewhere around the lyric, “If the dear little beaver/Were a birth control believer/Tell me where would you get your coat?” that I realized that Kristy Cates, as an American tourist looking to be “shocked” in Paris (that’s literally the extent of her character development), was going to run away with the show.

Cates is no newcomer to the musical theater scene; she was Idina Menzel’s original understudy in Wicked (check out her fierce “Defying Gravity” from later runs of the show on YouTube). But the Musicals in Mufti format—on-book, ten days of rehearsal—can throw some talented performers off their A-game.

It’s a treat, then, to see Cates singing pretty ridiculous material with such command and panache. That first song “Where Would You Get Your Coat?” celebrates marital fidelity on the grounds that if furry animals did not make babies, there wouldn’t be enough fur to go around. Her second equally rousing novelty piece, “The Tale of the Oyster,” culminates in a puked-up oyster declaring wisely “I’ve had a taste of society/And society has had a taste of me.” There’s nothing semi-staged about Cates’ clarion delivery, each line ringing with witty clarity.

As for the rest of this tourist trap of a musical, it’s nothing to write home about. The flimsy plot (the book is by Herbert Fields) finds wealthy Peter Forbes (Andy Kelso) vacationing in Paris. He’s fallen in love with Looloo (Evy Ortiz) on the boat, but when his companion Billy (Cole Burden) bets Peter $50,000 that Looloo would never agree to marry him if he were poor, Peter can’t resist. That’s just the sort of game that rich Americans loved to play in the 1920s, apparently, so the rest of the show consists of Peter wooing Looloo while working various toilsome real-people jobs, such as tour guide and dancing waiter.

Porter’s lyrics pop with their usual charm and occasional acerbity, even if most of the songs cover fairly mild textual territory. The romantic couples (there are a lot of them) express themselves with genially generalized lyrics—“You Do Something to Me,” “You’ve Got That Thing”—but there are gorgeous melodies throughout, especially the aching “You Don’t Know Paree.” Evans Haile, York’s executive director who created this script adaptation with Tommy Krasker in 1991, music directs and leads the two-piano, one-banjo mini-band agilely. (The prominence of Dan Erben’s banjo is a risky orchestration move, but it’s a groovy hoot here, especially whenever the banjo’s frame transforms into a percussion instrument.)

The most startlingly clever (or cleverly startling) moment in the score arrives in chanteuse May’s lament that she’s “unlucky in gambling and unlucky in love”:

"I said, ‘I like John Gilbert a lot, don’t you?’
He didn’t answer but when the show was through
I realized that he liked John Gilbert too."

With the exception of that Porter verse, with a sexual frankness way ahead of its time, most of the show feels snugly rooted in 1929. The plot’s cheery misogyny—like the general theme of Paris unlocking American women’s wild sides—becomes a little exhausting. Still, the women win out across the board performance-wise, especially Madeline Trumble as Looloo’s boisterous friend who’s “wasted years enslaving [her]self by behaving [her]self,” and Ashley Blanchet as raunchy May who’s “looking for a primitive man.” The men mostly blend together into one bland bunch, despite some nifty tap-dancing.

But give me a Porter tune and a casting coup like Kristy Cates, and it’s enough to bring me back to the York at the end of the month for another Porter pick, Panama Hattie.