42FT – A Menagerie of Mechanical Marvels 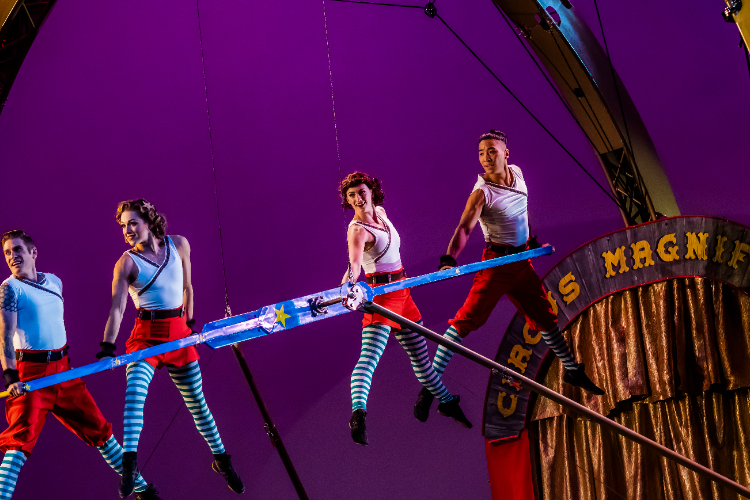 Cast of 42FT – A Menagerie of Mechanical Marvels. Photo by Maike Schulz.

BOTTOM LINE: Whether you're a kid at heart, have kids in tow or just want to watch incredible athleticism, Cirque Mechanics will have you spellbound.

If you've never been to the New Victory Theater, you may be unfamiliar with Cirque Mechanics, but they have been appearing on the New York stage for the last decade. The inspiration for 42FT, the company's fourth production, is the circus ring (the number is the ring's diameter) which has been part of the big top for 250 years. It has virtually no dialogue, but you won't miss it.

In the bare-bones plot, a young man (Justin Therrien) wants to join the circus, but first must impress the troupe. He turns out to possess a set of extraordinary skills, including mime and sword swallowing. In one of the (unexpectedly) funniest moments of the night I was there, Therrien, still sweating his way into the tent, went into the audience to pick a volunteer to help him hone his act on stage; he ended up with a guy who was a fantastic improviser. The results were hilarious.

Although the entire twelve-person cast is fantastic to watch, the MVP is Battulga Battogtokh as the Strong Man. The muscled Mongolian, shimmering with effort, juggles bowling balls and a giant log and balances multiple people off his swinging arms, which deservedly earns the loudest applause. Other standouts: Nikki Unwin and Elijah Newton are utterly graceful as they swing from a single trapeze, and both the Revolving Ladder and the Russian Swing made my heart catch in my throat more than once. If you haven't been to the circus in a while or simply want to see masters of their craft and pure artistry at work, you are in for a treat at 42FT.

(42FT – A Menagerie of Mechanical Marvels plays at the New Victory Theater, 209 West 42nd Street, through January 5. The running time is 1 hour 45 minutes with an intermission. Performances are generally Sundays, Thursdays, and Fridays at 12 noon and 5; Saturdays at 2 and 7, but check website for exact schedule. Tickets are $22 - $59 and are available at tickets.newvictory.org by calling 646-223-3010.)