This show is now closed. For more information visit thebuildersassocation.org

Directed and co-created by Marianne Weems;
Co-created and written by James Gibbs and Moe Angelos
Produced by The Builders Association 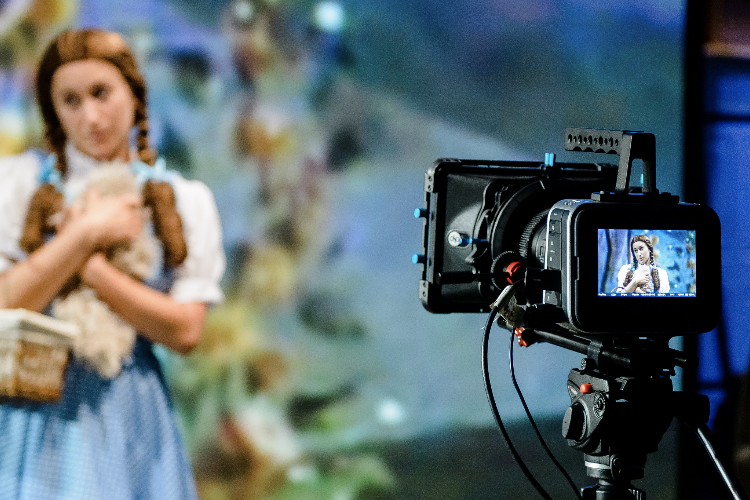 Hannah Heller in Elements of Oz. Photo by Gennadi Novash.

BOTTOM LINE: There’s no place like The Builders Association’s Elements of Oz.

Playing for merely two days at NYU Skirball, you’ll wonder at how much work has gone into Elements of Oz. (It debuted in 2016 at 3LD, but hasn't been seen much since). There is something astounding about this feat of theatrical ingenuity. And for all the bells and whistles, there’s tremendous heart inside this play with devised source material, including text from public radio interviews, the movie itself, and historical retrospectives.

As we understand from the title, The Builders Association breaks down The Wizard of Oz to discuss how and why the film was made and the cultural resonance it leaves. For some, the film is a vivid allegory for capitalism on our journey down the yellow brick road to the Emerald City. For others, it's a queer fantasia where the "straight world" of black and white is transformed into a land of beauty. And then for many others, it's a classic holiday movie to watch with the fam.

Creators Marianne Weems, James Gibbs, and Moe Angelos intersperse videos with trivia about the film that manages to be illuminating and emotional, including trips to the hospital by some of the film’s most notorious stars and an equally and fun and terrifying bit about the roles doubled by the munchkins—hint: it involved flying them on faulty trick wires.

At times, the additional material can feel laborious, as with an extended sequence of Judy Garland’s later-in-life turmoil that seems both unnecessary and incomplete. Other sections are revelations, like the use of text from the mouth of Ayn Rand (played by the amazing Hannah Heller) mixed with moments where she momentarily transforms into the Wicked Witch of the West shouting “Gold! Gold! Gold!” and then becomes Rand again. It's horrifyingly seamless.

The magic of Elements of Oz is that we are expected to keep our phones on and download an app to expose the technicolor grandeur of this new Oz through augmented reality. This is just pure fun. The team packs the lobby and theater with instructions on how to download the app. It’s a move that feels right, in that it digs into the core of what movie-goers in 1939 must have felt as they were exposed to the (fairly) new technology of color film (although not the first use of technicolor, as the production is quick to point out.)

That said, you don’t exactly need the app, and I’d suggest you don’t rely on it too much. The more powerful images are to be found by looking around the theater at the interplay between live action and all of the other phones that sometimes project the tornado, farm animal noises, tittering munchkins, and flying monkeys directly over the top of the stage images.

The most powerful use of this technology also solves an intriguing problem—how this production will answer copyright infringement when it comes to the pivotal singing of “Over the Rainbow.” Weems, Gibbs, and Angelos break the fourth wall right over this problem, instead switching all of our phones to what must be hundreds of different people across the world singing their versions of the song on YouTube.

Funny though, that when we are asked to use our phones in a place (live theatre) that ordinarily still shuns them, I sometimes longed for that traditional holy space. Wondering if the vibration I felt was a message or part of the app, I checked my email and texts (no messages—it must have been the app). Is the world of technicolor to be found in these most addicting of devices, or is there no place like home? I have never been to Kansas. Why am I longing for it?

(Elements of Oz played at NYU Skirball, 566 LaGuardia Place, December 7-8, 2019. The running time was 90 minutes, no intermission. Performances were Saturday at 3 and 7:30, and Sunday at 3. More information is available at nyuskirball.org and thebuildersassocation.org.)

The cast is Moe Angelos, Sean Donovan, and Hannah Heller.