This festival is closed. 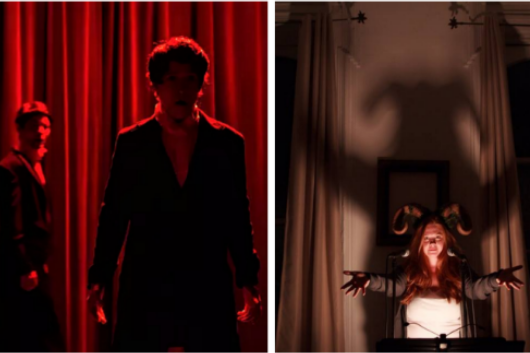 The latest addition to New York’s festival lineup, the So-fi Festival distinguishes itself as a “low-fi, high-concept” collection of small shows combining storytelling and multidisciplinary performance. Staged in the living-room setting of Chelsea’s Torn Page, the double-bill of The Coldharts’ Edgar Allan and Jody Christopherson’s St. Kilda enfolds audiences in a night of dark humor and innovative horror.

Inspired by the history and writings of Edgar Allan Poe, the two-person musical Edgar Allan, written by Katie Hartman and Nick Ryan (aka The Coldharts), imagines the famed writer’s early years as a megalomaniacal schoolboy. Sent to England’s Manor House boarding school in an attempt to curb his eccentricities, the eleven-year-old Edgar Allan (Hartman) relishes the opportunity to subjugate his peers and rise to the top of his class. However, his plan for scholastic domination is thwarted by the presence of a second Edgar Allan (Ryan), a mysterious classmate who shares his name. A wary alliance turns to friendship as the misfit Edgars form an after-hours society and set out to explore the school’s hidden places.

When revelations fray the pair’s trust, their bond erupts in a revenge cycle worthy of any Poe narrative.The Coldharts tackle this origin story with impish glee, clearly at home in the shadows they create. Hartman blends Poe’s trademark madness with winsome quirk; as the rival Edgar, Ryan’s raspy voice and creepy deadpan perfectly counteract her intensity. Showcasing the pair’s musical skills, ukulele-and-trumpet-accented songs punctuate scenes, bringing emotional depth to the play’s Gothic camp. The show’s eerie lighting lends intrigue, but can backfire when deep-toned washes swallow performers’ facial expressions. Poe fans will appreciate Edgar Allan’s many winks to canon, but viewers of all literary tastes can share in its twisted fun.

Written and performed by festival co-organizer Jody Christopherson, St. Kilda extends the night’s mystique with folklore-infused story and evocative soundscape. Following the death of her grandmother, a young American woman (Christopherson) travels to Scotland, seeking clues to her family’s past on St. Kilda, a remote island steeped in mystery and Celtic lore. Armed with just her wits and an old map, she coaxes a Dutch boat captain (the voice of Michael de Roos) to take her to the island, uncovering in her search the dark secrets at St. Kilda’s heart. When natural and otherworldly dangers threaten her mission, she must face St. Kilda’s strange history and her family’s connection to it.

Billed as a “horrific sound immersion/excursion,” St. Kilda owes its virtuosity as much to Christopherson’s storytelling as to the audio effects that support it. As the tale’s heroine, Christopherson traverses its many worlds, jumping between whip-smart narration, ethereal vocals, and primal breaths of survival and fear. Andy Evan Cohen’s sound and foley design surrounds us as Christopherson uses bowls of water, stringed instruments, pie plates filled with sand, and reverberating mics to build a soundscape as foreboding and magical as the fog that wreathes the island. The combined effect is pleasantly chilling, a tribute to long-buried tales and the power they obscure.

With its intimate staging and stripped-down tech, the So-Fi Festival, produced by Christopherson, Tom Page, Nathan Gebhard, and Romy Nordlinger, celebrates the timelessness of storytelling even as it breaks its boundaries. In essence, the art form requires little more than a performer and an audience, but the festival’s structure breeds ingenuity as its artists craft striking effects from minimal trappings. On a cold night, it’s inherently appealing to gather for a good story, and the So-Fi Festival nicely satisfies this urge.

Edgar Allan is created and performed by Katie Hartman and Nick Ryan, in collaboration with Mark Benzel.

The cast is Katie Hartman and Nick Ryan.