Written and Performed by Colin Quinn; Directed by Bobby Moresco 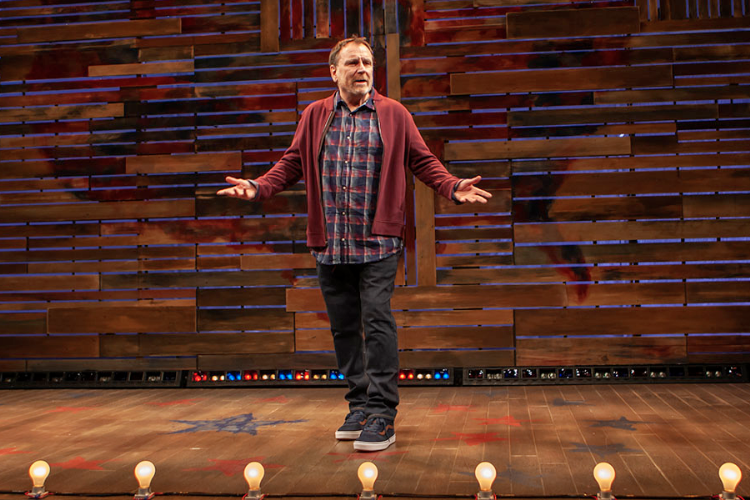 BOTTOM LINE: The actor-comedian is back to take on the Nancy Pelosi lovers, the gun-toting conservatives and everyone in between in his latest show tackling politics, free speech, and other hot-button issues.

Colin Quinn is not at a loss for opinions on what’s wrong with this country, and he’s not shy about pointing fingers at pretty much anyone. It’s fitting that he comes out on stage to War’s “Why Can’t We Be Friends?” As he sees it, we share universal values—“family, security, community”—but since we can’t agree on how to get there, maybe it's time for the country to “consciously uncouple.” The problem, he explains, goes back to America’s origin story—specifically, to quote John Adams, “the two-party system is the greatest political evil under our constitution.”

To Quinn, it’s an act of insanity to still be relying on that form of democracy when we really can’t stand or support each other. “The reds base their vote on Paul’s letters to the Corinthians, and the blue are voting from the Chomsky Reader.” He goes further, suggesting that the U.S. got greedy with expansion, democracy, and sexual freedom, to name just a few of our ills. If only we had stopped at the thirteen colonies—“We didn’t listen to God. We had all of these mountains and rivers: natural borders...do you think Hungary and Scotland have less in common than Utah and New Jersey?”

He seems most disappointed about free speech, wishing everyone would just shut up once in a while. “For a free speech country, I haven’t heard that many great speeches…the Martin Luther King speech, the John F. Kennedy speech and the end-of-season monologues from The Bachelor.” In Quinn’s mind, social media has led to mob rule, leading to an amusing comparison between the arguing of the old days (at the local bar) vs. the Facebook-Twitter-Reddit firestorms of today.

I wouldn’t say I agree with a lot of Quinn’s positions, but he’s intelligent, thought-provoking, funny, and he doesn't play favorites. Although the ending, in which he names every state and gives an example of how each one is uniquely terrible, is largely uninspired and not all that witty (even if I laughed at the one for New Jersey).

One might wonder how many people in the audience will agree with Quinn on what’s wrong with America. But I don’t think that’s really the point. The purpose here seems to be to prompt people to think beyond sound bites and click bait, and to contemplate how we might course correct the path we’re on. And hey, these 50 states aren’t totally doomed. Quinn rhapsodizes about our towels (way better than Europe's) and our abundance of ice cubes. “Go out for drinks and you get six ice cubes. That’s the system we set up. The Prime Minister of England asks for ice and she gets one ice cube.” So America, there may be hope for you yet.