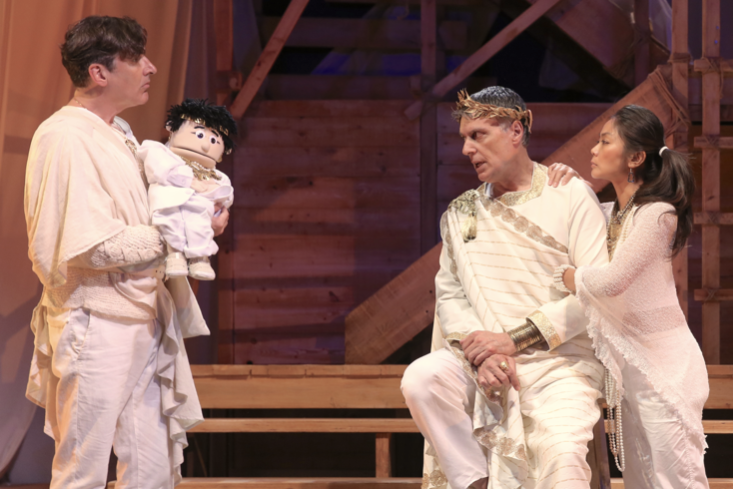 BOTTOM LINE: What is the creature that walks on spectacular sets in the morning and barely any sets at all in the evening? If Shaw's Caesar and Cleopatra is a Sphinx's riddle, this halting production hasn't solved it.

I first encountered George Bernard Shaw’s rarely staged 1898 play Caesar and Cleopatra at the Stratford Festival in Ontario back in 2008. A massive production, with a humongous sphinx and a ship that sailed in from the wings, Stratford’s treatment of this semi-prequel to Shakespeare’s Antony and Cleopatra was wry, lively, and deeply moving. That was due in large measure to the stars: the aging, confident Roman general was played by Christopher Plummer, opposite a magisterially impish Nikki M. James (pre-Broadway fame in The Book of Mormon) as the brash adolescent whom Caesar grooms into a formidable monarch.

My next experience with C & C came this month, at the far tinier Theatre Row, where David Staller’s Shaw-centric Gingold Theatrical Group has taken up residence. In re-sizing—and sometimes even rewriting— Shaw’s sweeping play, director Staller has pioneered a Caesar and Cleopatra that bears only slight resemblance to that grand Canadian incarnation.

The good news is that the unfamiliarity is partly intentional. Shaw eventually expressed regret about the monumental scope of his work: “I’ve written a play about how people think and feel and struggle, only to have them overwhelmed by a Christmas tree of sparkle,” he wrote, dismayed, in 1907. Digging into Shaw’s letters, interviews, and production notes, this adaptation seeks to enact the Caesar and Cleopatra of its creator’s dreams.

But Staller’s attempt to realize Shaw’s vision, while well-meaning, seems misapplied. What Shaw probably recognized was that building his ideological drama from bricks made out of scenes involving fully-pitched battles, the burning of the Library of Alexandria, two bloody murders, and a series of leaps into the Nile obscured his focus on the playful, passionate, perilous psychology of a pair of great leaders. That busy-ness of plot, handled lithely in the Stratford production, may be ingrained into the play in ways that Staller’s makeover excavation can’t get at.

So if attractive muddle got in the way of the Caesar and Cleopatras of yore, it’s unattractive muddle that distracts here. Maybe a more abstract staging would have separated the characters from the chaos around them more securely. But replacing an opulent set with unappealing scaffolding, dives off an onstage parapet (I remember that scene vividly from Stratford) with hops over the footlights into the audience, and a child actor with a ventriloquist’s puppet (a gimmicky illustration that it’s a scheming vizier who pulls the boy king Ptolemy’s strings) won’t solve the problem.

Nor will creating an awkward framing device where Ftatateeta (Brenda Braxton), Cleopatra’s nurse, takes the audience back in time, speaking in decidedly un-Shaw-like clichés such as her closing prayer “I hope that all of your journeys will bring you closer to your own magic, and toward your own understanding of everything. And peace.” (I’m also not sure about the necessity or effectiveness of Ftataeeta barking orders at select “slaves” in the audience.)

Braxton does ultimately make much of one of Shaw’s most powerful women: before Caesar comes along, it’s Ftatateeta who rules Cleopatra (Teresa Avia Lim) and not the other way around, and the servant delights in demonstrating her mastery over her mistress. Lim is spunky in her early scenes (and particularly compelling when Cleopatra admits her infatuation with the far-away Marc Antony whom she has once met), but there could be clearer indications of the commanding queen in the anxious princess Caesar discovers.

There is a Pygmalion streak in the play, to be sure (or rather a Caesar and Cleopatra streak in Pygmalion, which Shaw wrote much later), but it’s not drawn out here with much nuance: Robert Cuccioli’s Caesar instructs Cleopatra in the art of nobility with all the subtlety of a high school football coach. And in Caesar’s most Professor Higginsy moment, his condescension just sounds icky when he hoots, “Have I not made a woman of you, after all?”

I wonder, too, whether Shaw took his characters quite as seriously and his story quite as soberly as Staller thinks he should. In the original text, there’s almost a Gilbert and Sullivanesque coyness detectable in the superimposition of British values and conversationalists onto the ancient world a la The Mikado. “We learn from history that we learn nothing from history,” Caesar explains dryly to his followers. Here's hoping future productions of Caesar and Cleopatra, whether they aim for the opulent or intimate, will learn something from this one.

(Caesar and Cleopatra plays at Theater Row, 410 West 42nd Street, through October 12, 2019. The running time is 2 hours 30 minutes with an intermission. Performances are Tuesdays, Wednesdays, and Thursdays at 7:30; Fridays at 8; Saturdays at 2 and 8; and Sundays at 3. Tickets are $69 and are available at telecharge.com or by calling 212-239-6200. For more information visit gingoldgroup.org.)