Written and Performed by Harvey Fierstein; Directed by Kimberly Senior
Produced by the Manhattan Theatre Club 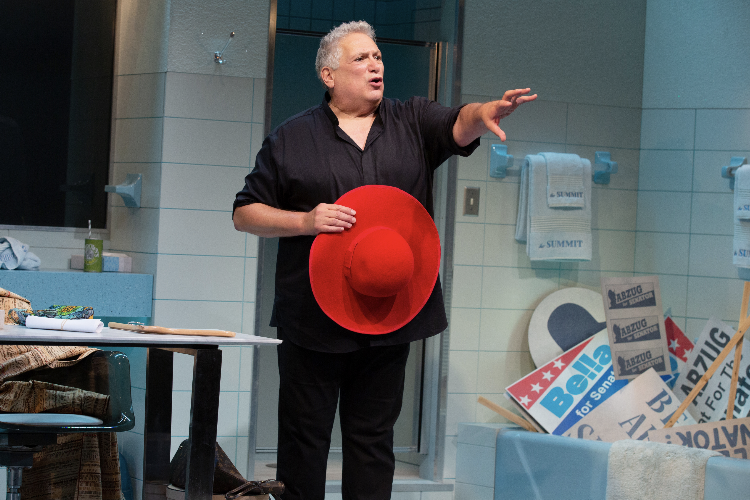 Political firebrand Bella Abzug was known as “Battling Bella,” a moniker that aptly describes the uphill fight in nearly every aspect of her life and career. In the heartfelt Bella Bella, written and performed by four-time Tony Award-winner Harvey Fierstein (who draws from Abzug's works), Abzug anxiously awaits the results of the Democratic primary in a five-way race for a seat in the U.S. Senate. The action takes place over the course of a night spent entirely in a hotel bathroom on the Upper East Side. “You’ve heard of backroom politics and bedroom politics? Welcome to bathroom politics,” she quips.

Fierstein makes his grand entrance as Abzug, backlit in the hotel shower’s threshold and wearing a wide-brimmed hat (Abzug’s signature accessory). Yet this isn’t a traditional drag performance. Fierstein wears no make-up, and dresses simply in a black dress shirt and pants, and no shoes. By omitting any artifice of femininity, Fierstein suggests a person can embody another regardless of sex by focusing on their words. Abzug herself once said “Women have been trained to speak softly and carry a lipstick. Those days are over.”

Abzug’s life’s work is impressive, both in terms of its breadth and depth, with many opponents (sometimes within her own party, as evidenced by the five-way primary for Senate). She went to Columbia Law School and became a lawyer in the 1940s, at a time when few women practiced law. She spent the better part of two years in Mississippi representing a black man, Willie McGee, whose consensual affair with a white woman led to a conviction of rape, and eventually his execution. In a particularly poignant moment, Abzug reveals the toll his case took on her and her faith in social justice.

Fierstein knew Abzug, who passed away in 1998. Her daughters approached him to write a musical based on her life, but in developing the piece, it seemed more conducive to a solo show. Eventually, he agreed to play her. As Abzug, Fierstein adopts a slight New York Russian Jewish accent, and peppers her lexicon with Yiddish witticisms. His performance is filled with self-effacing, sidelong looks and jokes. But many of the best lines come straight from Abzug’s lips. Her first campaign slogan was “A Woman’s Place is in the House—of Representatives.” From serving in the U.S. House of Representatives from 1971-77, to calling for Nixon’s impeachment, to opposing the war in Vietnam, Abzug never shied away from a confrontation.

John Lee Beatty’s vibrant blue bathroom set serves as a one-woman warroom, in which Abzug paces, debates, and contemplates her next move once the election results roll in. Tyler Micoleau’s clever light design includes projections (by Caite Hevner) onto the façade of The Summit Hotel, which flanks the action onstage.

Bella Bella is a tour-de-force by Fierstein, one done in tribute to Abzug, a woman he channels with love and affection but never lets off too easy. By setting her story on a night when all she has worked for hangs in the balance, Fierstein lets us see the vulnerable side of a venerable woman. He shows us there’s power in caring for the people you serve, and in his care for “Battling Bella,” that her legacy carries on.

(Bella Bella plays at MTC's City Center Stage I, 131 West 55th Street, through December 1, 2019. The running time is 90 minutes, no intermission. Performances are Tuesdays at 7; Wednesdays at 2 and 7; Thursdays and Fridays at 8; Saturdays at 2 and 8; and Sundays at 2, but performance times vary a bit through November. Tickets are $99 and $139. For tickets and more information visit manhattantheatreclub.com.)