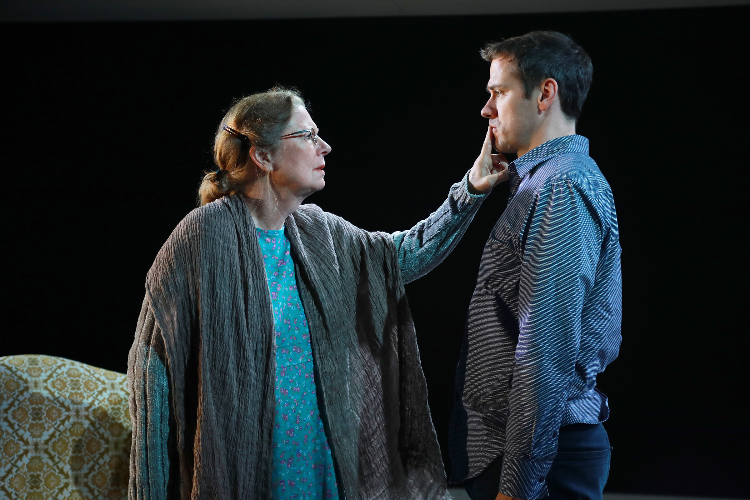 Deborah Hedwall and Richard Gallagher in All My Fathers. Photo by Theo Cote.

BOTTOM LINE: A play about a playwright who learns a shocking secret about his parents' past, then writes a play about it.

As a gay kid growing up in a midwestern suburb, David (Richard Gallagher) couldn't wait to leave. His relationship with his mother Regina (Deborah Hedwall) was never easy, and time and distance haven't helped. Regina's Christian beliefs and critical nature have always made David feel unwanted; the fact that she's now afflicted with dementia just creates more tension. Still, David tries to be a dutiful son, visiting his folks back home, if only to support his mild-mannered father, Bill (Jonathan Hogan). But on one of these visits, Regina drops a bomb: David isn't Bill's biological son, she insists, but the product of an affair.

All My Fathers is a semi-autobiographical play that takes detours into dreams, memory, and literary history while trying to untangle writer Paul David Young's relationship to his parents. Young's onstage alter-ego, David tries desperately to determine what's true and what's not by confronting Regina and Bill, summoning his "real" father, Dr. Woodman (Brian Hastert), from beyond the grave, and sending his DNA to a genetic testing company. But the "truth" of his identity isn't as simple, he finds, as biology vs. history.

Director Evan Yionoulis handles the potentially heavy material with a light touch, keeping her cast's heads above the flood of twists and turns, with Hedwall and Hogan turning in performances that are both hilarious and poignant. Young's text mirrors the emotional journey of his "protagonist," in that it goes through a lot of different feelings but hasn't come to terms with what it all means. Occupying an imaginary space between soap opera All My Children and stage drama All My Sons (with some ingredients from Death of a Salesman), All My Fathers opens up a can of worms that it never figures out how to close. Your enjoyment of it will likely depend upon your tolerance for worms.

(All My Fathers plays at La MaMa Downstairs, 66 East 4th Street, through October 20, 2019. The running time is 90 minutes without an intermission. Performances are Thursday though Saturday at 8 and Sunday at 5. Tickets are $30, $25 for students/seniors and are available at lamama.org or by calling 212-352-3101.)