Off Off Broadway, Classic
Runs through 2.17.19
The Sheen Center for Thought & Culture, 18 Bleecker Street 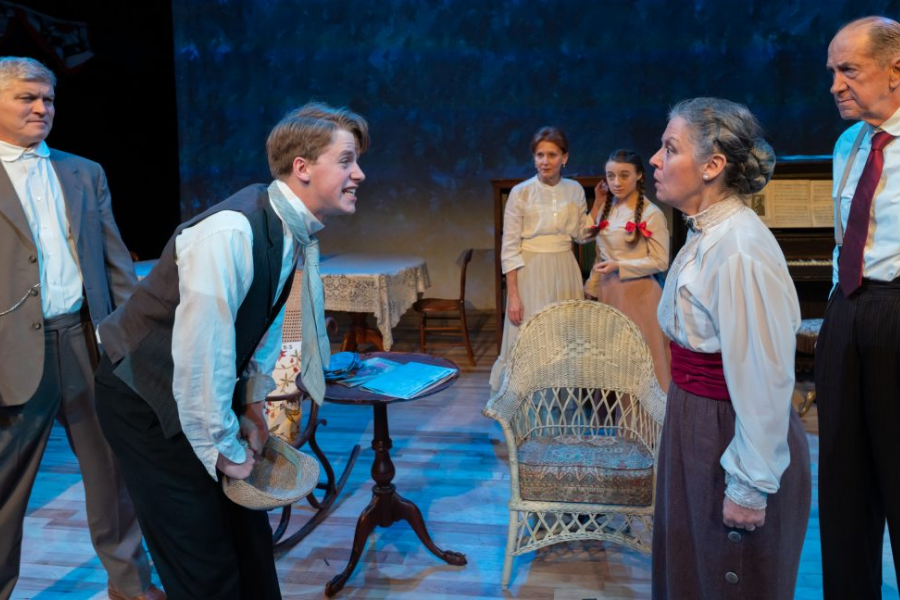 BOTTOM LINE: A young man works through heartbreak as his family attempts to celebrate the fourth of July in 1906.

If your familiarity with Eugene O'Neill starts and ends with Long Day's Journey into Night or The Iceman Cometh, you could be forgiven for thinking he only wrote long, depressing dramas. But then there's Ah, Wilderness!—a comedy by O'Neill. Indeed, it's the only comedy of his that's at all well-known, even if it isn't as often produced as his Pulitzer prize-winning pieces. So I appreciate companies like Blackfriars Repertory Theatre and the Storm Theatre Company for producing such lesser-known classics, and for reminding us of our past so that we might progress to a more enlightened future.

Ah, Wilderness!—about a family in 1906, and first performed on Broadway in 1933—enables us to see humans at their core. This play shows the interactions of siblings, parents, and lovers, and the standard push and pull of teenage angst amidst a loving family dynamic. It reminds me that despite all of our emotions and problems, we can get through anything as long as we have a family or support system.

Even if you've never encountered Ah, Wilderness! before, director Peter Dobbins's staging makes it very clear, in the opening moments, that it will center around Richard Miller (Peter Calvin Atkinson)—he's the guy reading a book in a spotlight. It's a brief moment, but very telling of the next two and a half hours. We then gradually meet Richard's siblings—there's Tommy, the youngest (Rory Greenfield and Douglas Wann switch off for the role), Arthur (Sean Cleary), an older brother attending Yale, and Mildred (Heather Olsen) the lone sister. Typical siblings, even while the kids pester and make fun of each other, they also look out for one another. Their mother Essie (Lynn Laurence) likes to think she's the stern enforcer of rules, but really she seems quite lenient and understanding. And while patriarch Nat Miller (Ken Trammell), who owns the newspaper in this small Connecticut town, is quite respected, he is also endearing, and surprisingly reasonable even when angered.

Old sweethearts Aunt Lily (Renée Petrofes) and Sid Davis (Ted McGuinness) add to the full house. Yet the story is resolutely about Richard, who is in love with Muriel McComber (Megan McDevitt). But as everyone plans their celebrations for the fourth of July, Muriel's father (Jim Haines) stops by in order to forbid Richard from courting his daughter. In fact, he even provides a letter written by Muriel herself, ending things. But what is a young man to do with all those emotions, except to spend the evening at a bar with another woman and become inebriated for the first time? That will prove to everyone he's over Muriel, right?

While Ah, Wilderness! is definitely a comedy, don't go in expecting broad jokes about sex and politics. The humor here is more subdued: laughter about secretly serving a different kind of fish, or an amused child observing a drunk man at the dinner table. Dobbins stays true to O'Neill, giving a straight-forward rendition to honor his legacy. The one thing that stands out is the commitment of lead actor Peter Calvin Atkinson. Atkinson is immersed in the mind, body, and spirit of Richard Miller, a kid who is just learning about the world and his place in it. Richard fills his head with unorthodox (for the time) literature, doing his best to make sense of the concepts—watching Atkinson portray this struggle is captivating. Even if the subject matter does not entice, Ah, Wilderness! is still worth seeing for the committed acting of Peter Calvin Atkinson.