Written and Performed by Maddie Corman; Directed by Kristin Hanggi 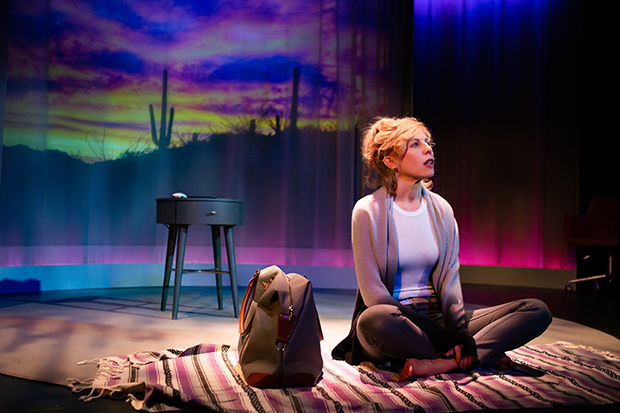 Maddie Corman is hardly a household name, but is still recognizable from her numerous theater, television, and film roles. A few years ago, she was in the news not for her work, but for her husband's arrest on child pornography charges. In her solo show Accidentally Brave, she tells her story of the nightmare of finding out the unthinkable about the father of her three children, and the aftermath.

Let's be clear. This is her story. As she lets us know from the beginning, she can't tell her husband's story or her children's story, because it's not hers to tell. This is a smart move because it keeps the show from becoming salacious or feeling like she is capitalizing on a tragedy. The play mostly deals with what was going on in her mind as this was happening, and how she was able to get to where she is today. She is still not okay (her words), but she has found ways of coping.

Her performance is sometimes heartbreaking, sometimes funny, and always riveting. Yes, I did say funny. She is able to find humor at the appropriate times, giving the audience opportunities for much needed laughs, without ever making light of her husband's horrific actions. Sometimes the writing does veer a little too much into self-help territory, especially in text conversations between herself and her "guardian angel," a celebrity whose name Corman does not disclose.

It's hard to put a lot of action in solo shows, and maybe director Kristin Hanggi tried to overcompensate with too much business—Corman is constantly taking off her cardigan and putting it back on again, which becomes distracting.

This is a tasteful show given the subject matter, but it is hard to get past the fact that Corman is still married to her husband. I know I'm here to judge the show and not her life choices, but even after listening to her discuss addiction and recovery, it's difficult to comprehend. He may not have been the one making the videos, but the fact that he watched them makes him complicit in the abuse of children. Yes, this is her story, but there could have been more acknowledgment of the victims.