You Hold a Pole Every Day

Off Off Broadway, Solo Show
Runs through 7.31.18
Teatro LATEA at the Clemente, 107 Suffolk Street 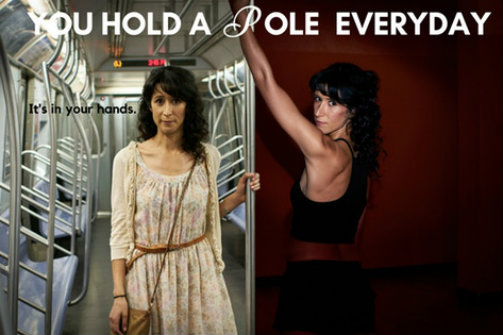 Laura Sisskin Fernandez in You Hold a Pole Everyday.

BOTTOM LINE: A talented solo performer exposes her body negativity and the depths of her soul...through Soul Pole.

Downtown theatre festivals are often known for presenting quirky and offbeat performances, so audience members might not be too surprised to walk in on a blushing stagehand hurriedly shining up a stripper pole with hand sanitizer. If unplanned, this charming bit should stay in—it sets the stage well, as the sound of sultry rock soon fades into one that is more familiar: “Stand clear of the closing doors.” Actor-singer-writer Laura Sisskin Fernandez grasps the subway pole before looking directly to the audience to declare “I’m going to take a pole dancing class!” She goes on to nervously explain that her solo performance workshop encouraged her to confront her greatest fear—being in the middle of a dance circle—and amplify it, hence her brave foray into a group class at the exquisitely named Soul Pole.

The subway pole soon morphs into a dance instructor’s pole as Sisskin Fernandez transitions into a hardcore Soul Pole teacher, exuding pride and body positivity. Surrounding her on a circle of mats is a fun cast of classmates for the performer to embody, including a bawdy Jewish mother and a haughty Russian model. As Sisskin Fernandez leans in to Soul Pole, she begins to identify the reason for her physical discomfort and the no-go zones on her body, and her lifelong journey to the class begins to emerge.

Harsh discipline from teachers of Dickensian cruelty, and difficulty with family discussions around sexuality, led to her current status as an awkward adult who finds herself deeply confused and uncomfortable in romantic situations. It is during this journey that the play occasionally feels a bit muddled structurally, which reflects Sisskin Fernandez’ struggle to keep moving forward in spite of it all. This is why it is especially heartbreaking when we learn what happened once she was finally able to befriend the celebrity musician who most inspired her.

Under a lesser artist, the content of You Hold a Pole Every Day may come across as something best left for a therapist's office, but the quality and depth of Sisskin Fernandez’ performance transcends this trap entirely. Her endearing openness and vulnerability makes it impossible to feel unmoved, and there are moments when it feels almost wrong to not jump up on stage and give her a hug. Guided by the impressive direction of Astrid Cook, Sisskin Fernandez navigates the spectrum of the human condition skillfully, allowing audiences to see both her brokenness and her bravery. This is perhaps showcased best with "Freedom," a burn-it-down ballad that serves as a searing indictment against her predator.

Although there are some structural and technical elements that could be tightened, You Hold a Pole Every Day is a strong debut for a new playwright, especially one who also writes the lyrics and performs. Indeed, it begins to feel less like theatre and more like a Soul Pole class—complete with audience members openly weeping, raising their fists, and rooting for her to keep moving forward.