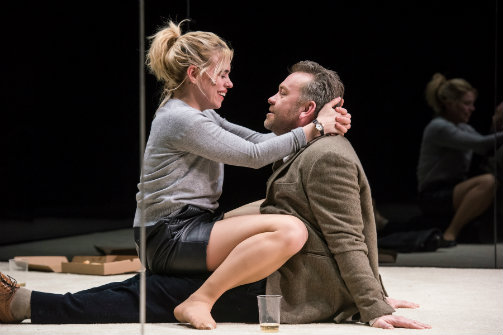 BOTTOM LINE: See Yerma for Billie Piper's transfixing performance, for the magical set changes, or for its female-driven story. Just see it.

As a woman in my 30s, it was at times difficult for me to watch Billie Piper in Simon Stone's modern adaptation of Federico García Lorca's Yerma, but it was so worth it. Not that my life is all that similar to that of Piper's character Her, a woman who is trying to conceive shortly after buying a house, but there is much that rings true about the challenges of being a woman when your biological clock is ticking, no matter your circumstances.

Stone's production is intentionally cinematic, made up of quick scenes intercut with darkness, subtitles indicating passage of time, and eerie music (from music and sound designer Stefan Gregory). The first scene is a funny exchange between Her and John (Brendan Cowell) and we watch as her life gets less amusing and more tragic. The entire play takes place in a glass box and as the lights go out, set pieces magically appear and disappear. I have absolutely no idea how these transformations happen so quickly, but bravo to set designer Lizzie Clachan for figuring it out.

The amplification of the mic'd conversations (again, a very deliberate choice) has a weird, distancing effect that takes some getting used to. Yet even though all these elements separate us from the action, Piper's performance makes it impossible to disassociate. She is at once strong and vulnerable, not just playing a woman spiraling into madness, but one who is messy and in a lot of pain, yet still occasionally able to experience joy. She is supported by a talented ensemble of evenly matched scene partners, especially Cowell, whose John could come off as a jerk, constantly going on business trips when things get difficult. But Cowell manages to make you sympathize with him as well.